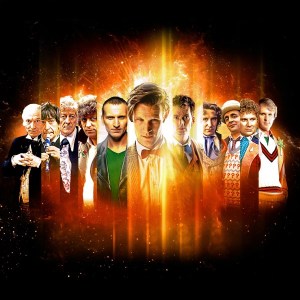 It comes as little surprise, but it’s still a crushing blow for longtime fans of DOCTOR WHO: The official word is there will be no classic Doctors in the 50th anniversary story.

We all knew that the buzz was against classic Doctors, but many old-time fans like myself continued to hold out hope that the scuttlebutt was a case of show-runner Steven Moffat lying. But such was not to be. (Caveat: This could still be an elaborate ruse — but it sure as Rassilon doesn’t look that way.)

The authorized, authoritative Doctor Who Magazine carried the official notification that only the 11th Doctor, Matt Smith, and 10th Doctor David Tennant will be appearing in the story. And, hey, that’s pretty exciting in and of itself. In any other season we’d be shouting from the rooftops that Tennant is back!

But some of us were still hoping against hope for all the living Doctors to at least cameo if not team up. (And, with actor David Bradley already being made up as the First Doctor for AN ADVENTURE IN SPACE AND TIME…) Ah, well…

Clearly, I wasn’t the first (or even last) to question whether Steven Moffat will actually reveal the Doctor’s real name in the season finale of DOCTOR WHO, but the question is getting a lot of attention across the pond.

I think Moffat’s latest comment can be taken as backpedaling a bit from the name-revelation:

“There’s going to be a revelation. I’m not teasing. I’m not wrong-footing you — you’re about to learn something about the Doctor that you never knew before.”

But is that something the Doctor’s name? Or will it be something else, like, say, the real reason the Doctor left Gallifrey — which would be a fun fact to learn, but it’s not his name.
END_OF_DOCUMENT_TOKEN_TO_BE_REPLACED 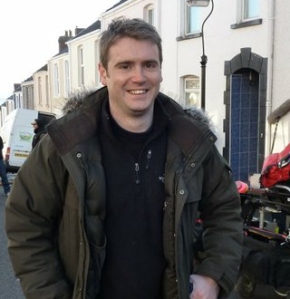 Former DOCTOR WHO Script Editor Brian Minchin has been named the new executive producer of the show, replacing the recently departed Caro Skinner.

Minchin said, in a statement:

“I’m thrilled and excited to be joining Steven Moffat on a show that has meant so much to me over the years. I’ve watched in awe as Steven has taken Doctor Who to wild and imaginative places and I can’t wait to get started on many more adventures with the Doctor.”

In addition to his tenure as Russell T Davies’ script editor, Minchin produced THE SARAH JANE ADVENTURES, the British episodes of TORCHWOOD: MIRACLE DAY and Davies’ WIZARDS VS ALIENS.

Current show-runner Moffat had this to say:

“When I first took over DOCTOR WHO, Brian was there as script editor, and in the most difficult time of a new Doctor and a new era, was completely brilliant. We lost him to producing THE SARAH JANE ADVENTURES at the end of our first run. Rising talent keeps rising, is how I comforted myself back then – but now I am beyond happy that Brian has risen all the way back to DOCTOR WHO, in his new role of executive producer. I look forward to getting hopelessly lost in space and time with him.”

Word is, Minchin is an unrepentant DW fan and is not afraid to speak truth to power — apparently having pointed out story problems to Davies in the past. Minchin is the fourth executive producer to work alongside Moffat since he took over the show.