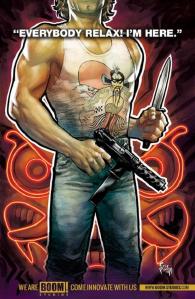 In news that is sure to shake the pillars of heaven, Boom! Studios has its intention to publish a comic book based on John Carpenter’s 1986 action/comedy film Big Trouble in Little China and teased the release with a piece of teaser art by The Goon’s Eric Powell.

But that’s all the information the publisher has released; no hints on the creative team (unless the Powell art is a tip-off), story, setting, how many issues or a publishing timetable.

In a resurrection worthy of regenerating cheerleader Claire Bennet, the canceled superhero drama HEROES is coming back to NBC in 2015 as a 13-episode miniseries called HEROES REBORN.

The original series was last seen in 2010, and while creator Tim Kring is back at the helm, it is unknown how many — indeed, if any — previous series stars will appear in HEROES REBORN. Hayden Panettiere, who starred as Claire, the unkillable cheerleader, has a new hit series in ABC’s NASHVILLE; Milo Ventimiglia, the “power sponge” Peter Petrelli, was just cast in ABC’s THE VISITORS; Zachary Quinto’s (Sylar) career has exploded on both the big and little screens; and producer/writer Bryan Fuller is running one of NBC’s few prime-time hits, HANNIBAL.

I think it is vital to get as many original cast members as possible to make some kind of appearance in order to give the new series some kind of credibility. Without at least a handful of familiar faces, the new project will feel like a ripoff rather than a successor. Especially important is getting Hayden and Milo, the backbones of the first series.
END_OF_DOCUMENT_TOKEN_TO_BE_REPLACED

Matt Ryan, a Welsh actor who had a role on the short-lived spin-off CRIMINAL MINDS: SUSPECT BEHAVIOR, has been cast as the lead in NBC’s CONSTANTINE, based on the supernatural investigator from DC Comics, according to The Hollywood Reporter.

“CONSTANTINE centers on master of the occult John Constantine, who struggles with his faith as he is haunted by the sins of his past and is suddenly thrust into the role of defending humanity from the gathering forces of darkness.”

Constantine is a reluctant and very flawed hero — he’s selfish, self-centered, cynical, jaded, not above cheating to win, and he doesn’t care who suffers the consequences of his actions, as long as it isn’t him. He smokes and drinks to excess and is just as willing to cheat and swindle the forces of Good as those of Evil. Well, at least that’s what the bloke is like in the Hellblazer comics; I’m sure NBC will lighten him up a bit. To hammer home a moral, I suggest the network play up the fact that Constantine is literally haunted by the ghosts of the dead friends he has betrayed.
END_OF_DOCUMENT_TOKEN_TO_BE_REPLACED

It’s here! The first official full trailer for Gareth Edwards‘ Godzilla, which will be released on May 16.

Watch it, now! Do not wait; do not pass GO; do not collect $200 — just watch this amazing, majestic, awe-inducing trailer!

It’s nice (but weird) to see Bryan Cranston in something other than BREAKING BAD, isn’t it? Too bad there’s only a one-second flash of Elizabeth Olsen, but Aaron (Kick-Ass) Taylor-Johnson gets a good line in. And once again we hear the King of Monsters’ rumbling roar, just as released yesterday.

Hopefully you’re aware that a new version of Godzilla is being made by director Gareth Edwards (starring Elizabeth Olsen, Bryan Cranston and Aaron Taylor-Johnson). It opens May 16, and a very low-key advertising campaign has been gradually ramping up.

The newest bit of promo material is a bit of a surprise to me: The studio has released an audio recording of Godzilla’s roar! Just as his look has been redesigned, so has his signature roar. Have a listen to this 12-second clip, but keep in mind that the first 10 seconds is Godzilla getting angry before unleashing his new roar:

END_OF_DOCUMENT_TOKEN_TO_BE_REPLACED

Turns out that rumor about the 12th Doctor taking on another companion — a teacher from Coal Hill School, no less — was true! Danny Pink, a teacher and colleague of Clara Oswald, will be played by Samuel Anderson as a recurring character in season eight of DOCTOR WHO.

Like Jenna Coleman, who plays Clara, Anderson is a veteran of the venerable British soap EMMERDALE, on which he played policeman Ross Kirk. His tenure overlapped with Coleman’s time as Jasmine Thomas, so the pair have worked together before.

“I was so excited to join DOCTOR WHO, I wanted to jump and click my heels, but I was scared I might not come down before filming started! It’s a quintessential part of British culture, and I can’t believe I’m part of it. It’s an honor to be able to work alongside Peter Capaldi and Jenna Coleman, and I can’t wait to show people how my character becomes involved with such a fantastic duo!”

END_OF_DOCUMENT_TOKEN_TO_BE_REPLACED

The trailers keep coming for The Amazing Spider-Man 2 and, like the others, this one includes some new footage along with covering a lot of familiar ground. With the May 2 release date fast approaching, I’m wondering if we’re starting to encroach on seeing all of the action — certainly the biggest set pieces — spoiled in the previews. At this point, I feel like all we need is a few scenes of exposition, and we’ve got the whole flick.

END_OF_DOCUMENT_TOKEN_TO_BE_REPLACED

If I had to pick the most unlikely monsters from rebooted DOCTOR WHO to make a return appearance, the Clockwork Droids would be very, very high on that list. After all, those robots existed only to service their ship, the SS Madame de Pompadour.

Nevertheless, there has been a pretty persistent rumor that the Clockwork Droids will appear in the 12th Doctor’s (Peter Capaldi) debut story of series eight, which is set in Victorian times. The latest tenuous bit of  “evidence” to support the rumor is the resume of an actor that describes him as playing a “Restaurant Droid.” Of course that could be any sort of droid, couldn’t it?

In “The Girl in the Fireplace,” the 10th Doctor (David Tennant) defeated the time-travelling robots by cutting them off from their starship in the future, and, with no purpose anymore, they all shut down and were left stranded in 18th century France.

Although I would enjoy seeing the creepy-looking ‘bots one more time, it seems highly unlikely the same particular group of robots would reappear; perhaps the droids would be from a similar ship to the Pompadour.

The latest from quirky master filmmaker Wes Anderson is called The Grand Budapest Hotel, and it bows on March 7. Here are a pair of clips that tease the typically odd experience in store for fans.

END_OF_DOCUMENT_TOKEN_TO_BE_REPLACED

At last, Rocket Raccoon of the Guardians of the Galaxy speaks!

In this short little introduction to the character, Rocket says a few lines, and Bradley Cooper is shown delivering his voice performance. Check it out.