Showtime still has not set a premiere date for its revival of TWIN PEAKS, but it did release a little teaser that assures fans that the new miniseries will  maintain the spirit of the original.

Why is the entire promo just Lynch eating a donut?

Because f*ck you — that’s why!

It’s David Lynch and it’s TWIN PEAKS and it’s pure genius, so deal with it. 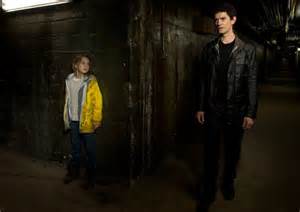 On the plus side, BBC America’s INTRUDERS director Eduardo Sánchez and scripter Glen Morgan seem a bit more interested in telling a story rather than obfuscating their tale this week, but on the negative side, the narrative was too on-the-nose this time. Unlike last week’s premiere, The episode may have been packed with exposition, but it was given to us via info-dump dialogue and voice-overs, which is amateurish and, frankly, beneath longtime THE X-FILES producer Morgan and former DOCTOR WHO producer Julie Gardner, the braintrust behind INTRUDERS.

I know, I know, I’m having a very hard time getting into this series; maybe you aren’t. But forget about a secret society of people trying to return from the dead; I believe this series was rushed to air way before it was ready. The scripts are obtuse and wildly meandering, and the characters are complete ciphers – and that’s a major, major shortcoming in a series which depends on the viewer recognizing that people are acting out of character. How the hell should we know if Amy speaking a foreign language or dancing to jazz is unusual for her? Oh, her husband just tells us it’s strange. Bad storytelling!
END_OF_DOCUMENT_TOKEN_TO_BE_REPLACED

One of British television’s greatest achievements was last year’s eight-part miniseries BROADCHURCH, which examined the agony of a small town after a child is found murdered. The series has been transplanted across the pond and reimagined for American audiences as the 10-part GRACEPOINT.

DOCTOR WHO’s David Tennant – who recreates his role from BROADCHURCH – and BREAKING BAD’s Anna Gunn star as the detectives charged with unmasking the killer before the town tears itself apart.

Chris Chibnall, who created and wrote BROADCHURCH, serves as an executive producer on GRACEPOINT and wrote the premiere episode, so he will be establishing the tone of the series. Hopefully he is allowed to keep things as intelligent and emotional as he was on the brilliant original. I’d hate to see that absolutely searing miniseries blunted and dumbed-down for Americans.
END_OF_DOCUMENT_TOKEN_TO_BE_REPLACED

Creator Tim Kring is planning to bring back HEROES as a 13-episode series called HEROES REBORN, and it appears that at least one star of the original NBC run will not be returning: Hayden Panetteriere as unkillable cheerleader Claire Bennet.

“Well, it was a shock to me, and, in fact, I believe I became privy to that through my cousin. She sent me a text message and told me about it, and, I mean, we had nothing, nothing to do with it; it will definitely be interesting to see how they reinvent that.”

“I think it’s a whole new set of characters. Who knows? It’s a little bit of an interesting feeling because you go, ‘That was our show, our home, our family,’ something that we had a major part in creating as well, and, I mean, I hope that they don’t have somebody else playing our characters, that would be a little dagger in the heart. But, you never know. I wish them success in it, for sure.”

Hayden, of course, currently stars in the ABC series NASHVILLE.

END_OF_DOCUMENT_TOKEN_TO_BE_REPLACED

Kiefer Sutherland’s iconic Jack Bauer character returns in the reboot of 24 — now trimmed down to a lean 12 episodes — that finds international fugitive Jack trying to prevent the assassination of the U.S. president in London.

However, just like every other series of 24, no one believes Jack, and this time he’s being hunted by CIA operative Kate Morgan, played by CHUCK’s Yvonne Strahovski (last seen in the tragically disappointing DEXTER series finale).

As you can see, Chloe O’Brian (Mary Lyn Rajskub) is back, and William Devane’s James Heller has been elevated from secretary of defense (in 2007’s series) to president! Also glimpsed: Kim Raver as Audrey Raines!

In a resurrection worthy of regenerating cheerleader Claire Bennet, the canceled superhero drama HEROES is coming back to NBC in 2015 as a 13-episode miniseries called HEROES REBORN.

The original series was last seen in 2010, and while creator Tim Kring is back at the helm, it is unknown how many — indeed, if any — previous series stars will appear in HEROES REBORN. Hayden Panettiere, who starred as Claire, the unkillable cheerleader, has a new hit series in ABC’s NASHVILLE; Milo Ventimiglia, the “power sponge” Peter Petrelli, was just cast in ABC’s THE VISITORS; Zachary Quinto’s (Sylar) career has exploded on both the big and little screens; and producer/writer Bryan Fuller is running one of NBC’s few prime-time hits, HANNIBAL.

I think it is vital to get as many original cast members as possible to make some kind of appearance in order to give the new series some kind of credibility. Without at least a handful of familiar faces, the new project will feel like a ripoff rather than a successor. Especially important is getting Hayden and Milo, the backbones of the first series.
END_OF_DOCUMENT_TOKEN_TO_BE_REPLACED 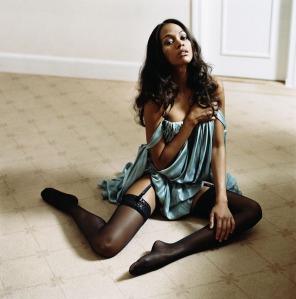 In her tireless quest to ensure that no other actress in her age group ever works again, Zoe Saldana (the Star Trek franchise, Guardians of the Galaxy franchise, Avatar franchise) has taken the role of the baby mama in a remake of Rosemary’s Baby.

Mia Farrow made the role famous in Roman Polanski’s 1968 adaptation of the novel by Ira Levin. The new production will be a four-hour miniseries on NBC — which, fresh off record ratings for a reimagining of The Sound of Music, naturally decided the next logical step is to remake a legendary and near-flawless horror film.

This  latest version — which begins filming this month — moves the creepiness from New York City to Paris, where Saldana’s pregnant Rosemary notices a lot of strange stuff going on with her husband, and neighbors taking an unhealthy interest in her unborn child. It’s Rosemary’s baby — but who’s really the daddy?

It won’t be long now. We’re just days away from the Oct. 17 premiere of season two of AMERICAN HORROR STORY. This year’s miniseries is subtitled ASYLUM, and is set in a sanitarium in 1964.

It sounds like a great premise to me, and here is an interesting trailer to whet the appetite. (It’s 1 minute long, which is an absolute lifetime for a show used to teasing little snippets.)

The above image is very A Clockwork Orange, isn’t it? I cannot believe that couple wants to get busy in one of the abandoned patient rooms. Have these people never seen The Cabin in the Woods?

After so much hype spread over so many months — it feels like the series has been releasing promo clips forever — I really hope AHS:A lives up to the promise of its premise.