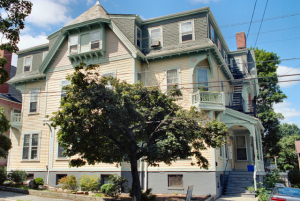 This sounds like a writer’s dream — or nightmare, depending on how one looks at it: A one-bedroom apartment in the same house in which the master of weird fiction himself, H.P. Lovecraft, lived and wrote is available to rent for just $965 a month in Providence, R.I.

The room is in a Victorian house at 10 Barnes St. — an address that Lovecraft actually incorporated into The Case of Charles Dexter Ward as the home of Dr. Marinus Bicknell Willett. It boasts hardwood floors, high ceilings, off-street parking and basement laundry facilities.

Lovecraft was born in Providence in 1890 and moved to New York City when he married Sonia Greene in 1924. But hated Brooklyn so much — have you read “The Horror at Red Hook”? — that he moved back to Providence without his wife just two years later. He was taken in by two aunts who lived in this house.

As you can see, the photos of the rooms provide no hint of the “queerly irregular shape” and “peculiar angles” or sloping floors that one might expect to have nurtured the author of “The Dreams in the Witch-House.”
END_OF_DOCUMENT_TOKEN_TO_BE_REPLACED 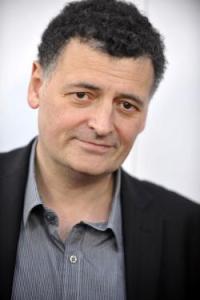 The BBC website has a truly fascinating video interview with DOCTOR WHO and SHERLOCK executive producer/lead writer Steven Moffat in which he talks about writing and his process. Yes, he mentions examples from DW and SHERLOCK, but the important stuff is (I think) his explanations of how he approaches things like writing itself, creating characters and what makes a great dramatic moment. He also doesn’t think writing should be such a solitary process. (Not sure I agree with him on that one, but who am I to argue…)

Follow this link to Writer’s Room to see the video (because BBC won’t let me embed it here); I think it’s totally worth devoting 11:20 to hearing about how and why a master of the craft of TV writing works!

As a final special tribute on this, the 123rd anniversary of the birth of H.P. Lovecraft, I’ve gathered a little gallery of artwork inspired by his writings. 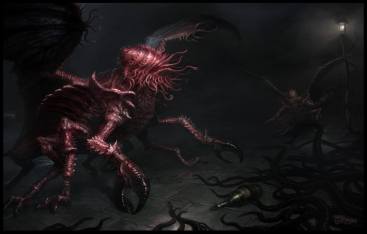 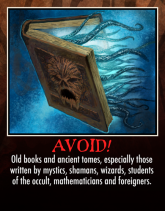 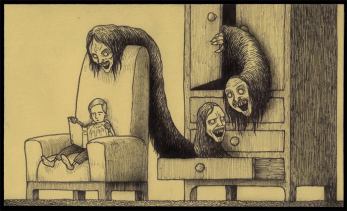 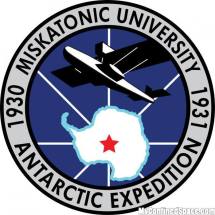 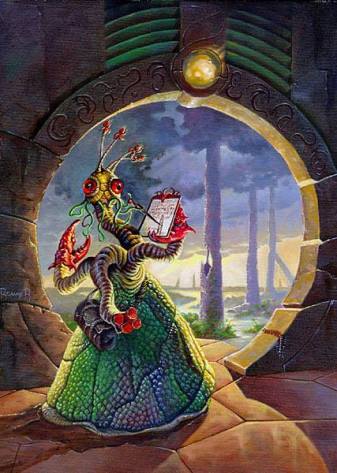 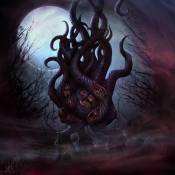 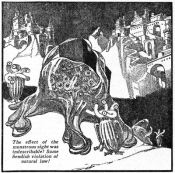 Obviously I did not draw/paint any of these, so mad props (and all rights) to the talented artists who did the heavy lifting here. 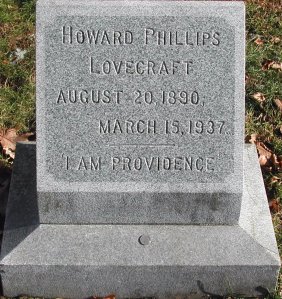 Today would have been the 123rd birthday of one of my very favorite writers, H.P. Lovecraft. The Gentleman From Providence is probably the most influential writer of the 20th century that most people have never heard of.

Lovecraft was the foremost practitioner of “weird fiction” in the early part of the last century. His stories specialized in atmosphere — atmosphere that would suck the oxygen right out of your lungs. Atmosphere that was truly terrifying and really could send chills through your bloodstream. (Read “Cool Air” for a truly chilling tale of… air-conditioning?)

Without Lovecraft, horror movies, books, games and comics would look very different. Perhaps someone eventually would develop the idea of beings from other planets worshipped as gods by primordial humans, and lurid tales of Piscean species interbreeding with centuries of townsfolk and ancient ruined civilizations in Antarctica and leaping, chittering things trapped in crypts — but in our universe, H.P. did that. His was the imagination that gave us an artist who painted ghouls from live models.
END_OF_DOCUMENT_TOKEN_TO_BE_REPLACED 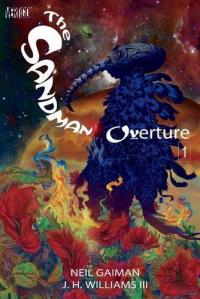 It’s a horribly hot, windy-and-rainy Monday here in New York City, and I cannot think of a better way to improve my dark mood and think cool thoughts than to contemplate the new Sandman comic book series coming from creator Neil Gaiman and new artist J.H. Williams III this autumn.

Gaiman’s epic return to the character that made his bones in comics back in the 1980s has a new name — instead of Sandman: Zero, it will now be called Sandman: Overture — and an official release date: Oct. 30.

The bimonthly Vertigo miniseries will explain bow Morpheus was so easily captured by Roderick Burgess way back in The Sandman No. 1. The series will alternate months with a “Special Edition” version of each issue that will showcase sketches and commentary.

Gaiman had this to say about revisiting the Endless universe:

“The most peculiar thing for me about returning to Sandman is how familiar it all feels. When I was writing Sandman from 1987 to 1996, I never had the feeling at any point that approximately 50 million people were looking over my shoulder, scrutinizing every word.”

I remember seeing house ads in DC Comics back in the day promoting the new Sandman series featuring an image of the first issue’s cover and the line, “I will show you fear in a handful of dust.” This was, of course, a reference to T.S. Eliot’s epic poem The Waste Land, and I wanted to read more. So when I stumbled upon the actual first issue of the comic, I snapped it up, and the rest was history.

Who better than the stellar Matt Smith and Neil Gaiman to introduce tonight’s episode of DOCTOR WHO, “Nightmare in Silver”?

You know the drill: Watch BBC America‘s Supernatural Saturday, starting with the Doctor at 8 p.m. 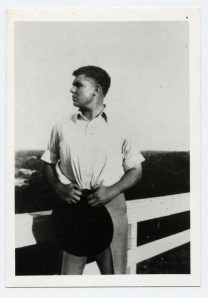 But, hey, Howard did much more than unleash a barbarian on pop culture. He helped shape modern pop culture by fathering the “sword and sorcery” subgenre of fantasy and contributing to Lovecraft’s horror mythos. Howard came up with a number of other vivid characters, including Solomon Kane, Kull the Conqueror,  Sailor Steve Costigan, Cormac Mac Art, Bran Mac Morn, El Borak and James Allison — notable for being disabled. I have previously looked at REH’s life, which tragically ended in suicide, so now I turn to his literary output.
END_OF_DOCUMENT_TOKEN_TO_BE_REPLACED 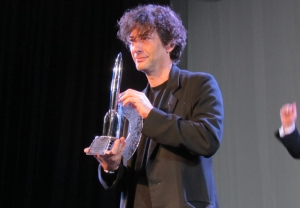 Best news of the day by far: Neil Gaiman has been 100 percent confirmed as a writer of an episode in the back half of series seven. He has penned the 12th episode, which will be followed by Steven Moffat’s season’s ender.

Of course there is no word yet on the episode’s title or storyline or guest cast, but just knowing that it is going to happen is awesome. Fans will recall that Gaiman won a Hugo award for his previous contribution, last year’s “The Doctor’s Wife.”

Confirmation of this news comes from the newest issue of Doctor Who Magazine, which lists the writers and directors for the rest of the season — but no broadcast dates or story titles. The rest of the writing roster looks like this:

2) 707. Written by Neil Cross. Directed by Farren Blackburn. (Not filmed)

7) 712. Written by Neil Gaiman. Directed by Stephen Wolfenden. (Not filmed)

“That is not dead which can eternal lie,

And with strange aeons, even death may die.” 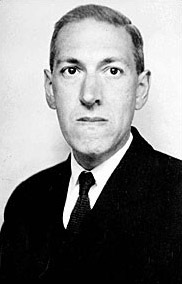 Howard Phillips Lovecraft would have been 122 years old today, had he not died of intestinal cancer on March 15, 1937.

Long neglected by the public, but appreciated by a cabal of aficionados and most writers who came after him, Lovecraft was easily one of the most influential writers of the 20th century. His moody, atmospheric stories set the standard for the extreme mind-bending terror that many subsequent authors would essay, but few would approach and none have ever matched.  Lovecraft’s field was known as weird fiction, and that description could not be more fitting. He wasn’t about the scare — although there are plenty of those — it was about creating unease in the reader. He worked hard to generate the feeling that if you were reading one of his stories at night, you mustn’t — no, DON’T! — don’t look behind you!

There were plenty of awful, hideous deaths in Lovecraft’s tales, but his terror was all in the language, and the horror in your mind. If you really imagine a doglike ghoul, isn’t it much more scary than a clear description in Pickman’s Model would be?
END_OF_DOCUMENT_TOKEN_TO_BE_REPLACED