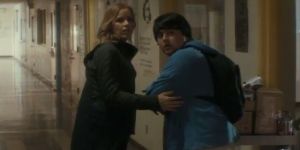 Well, FEAR THE WALKING DEAD was only mostly a snoozer this week.

I was interested when there was some actual tension — for about 45 seconds — when Madison and Knife Boy were running and pushing the cart because they weren’t sure who was setting off the school metal detectors.

There are two gigantic problems with FTWD, and the series has demonstrated no interest in remedying them.

Do something new and interesting, FEAR THE WALKING DEAD!

The new season of DOCTOR WHO will see the return of some alien species not seen since Russell T Davies‘ reign on the show: the rhino-like Judoon and the fish/turkey hybrid Hath.

The Hath were introduced in series four’s 10th Doctor story “The Doctor’s Daughter,” and a representative of the species was glimpsed in David Tennant‘s final story, “The End of Time.”

Since Mad Max: Fury Road was so shiny and chrome, this Honest Trailer doesn’t have a whole heck of a lot to work with, so this is one of the milder entries in the series.

“Tom Hardly in the movie” LOL

It’s a truism that every scrap of information about DOCTOR WHO spawns a myriad of questions and even more speculation; nothing is too insignificant to drive fandom into paroxysms of fantasy repercussions. Strap yourself in for these nuggets about the new season!

Consider these two photos from the pending prequel to series nine, “The Doctor’s Meditation,” scheduled to be shown at 3D screenings in movie theaters of the series eight finale “Dark Water”/”Death in Heaven” here in the USA on Sept. 15 and 16.

The first shot features Daniel Hoffmann-Gill as Bors, who reappears in the series nine opener, “The Magician’s Apprentice,” alongside Peter Capaldi as the 12th Doctor, who is holding a chalice. No biggie.

Tom Hardy (Mad Max: Fury Road) portrays the Kray Brothers, real-life identical twins Ronald and Reggie, who ruled the underground of London during the Swinging ’60s with a gang that dabbled in everything from protection rackets and armed robbery to murder.

Apparently Hardy is trying to make up for being the sidekick in Fury Road by playing both leads in this movie, which co-stars Emily Browning, Christopher Eccleston (the Ninth Doctor), Chazz Palminteri and David Thewlis (Remus in the Harry Potter films).

The story of the Krays was portrayed onscreen once before, in 1990’s The Krays, starring brothers Gary and Martin Kemp of Spandau Ballet.

Legend opens Oct. 2 in the USA. 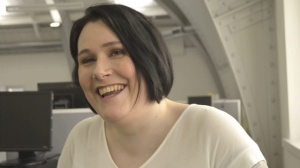 DOCTOR WHO have cast the show’s first transgender guest star: Comic Bethany Black will appear in the ninth episode of the upcoming series — but details about her character are being kept under wraps.

While unable to provide details, Bethany did write about her casting on her Facebook page:

“It is genuinely the greatest job I could ever have imagined getting. Everything about it is magical. I’m enjoying every day of filming and cherishing it, because you never know if you’ll ever get to do anything like this again. I only hope that I do the role and the show justice, and that you all enjoy it. For me it’s the gig of a lifetime.”

Episode 9 is the “found footage” story, which will be done entirely in ersatz cell phone videos.

The new season of DOCTOR WHO will, unfortunately, be indulging in a trend that I greatly dislike: the “found footage” gimmick. The ninth episode will be told entirely in “old phone and camcorder footage.”

Ugh. I am not looking forward to artificially grainy images and bouncing, shaking camera shots.

Shot in the style of movies like Paranormal Activity and The Blair Witch Project, the episode will involve “the Time Lord’s followers filming their attempts to fight a monster,” the Daily Star reported. 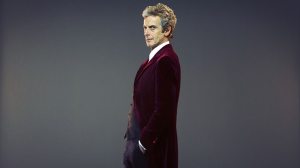 The Doctor has traveled alone many times before — but never before has DOCTOR WHO featured a story in which only the Doctor appears.

That will change in the upcoming ninth series: The penultimate episode will feature Peter Capaldi as the Doctor and no one else; no co-stars, no guest cast, nobody for the entire 45 minutes!

Executive producer Brian Minchin said: “Doctor Who has always been about taking risks. It’s never sat down and done a normal episode. It’s always done something extraordinary. Our audience likes to be challenged.”

Written by showrunner Steven Moffat, Episode 11 has been described by director Rachel Talalay as, “One of the most complicated and different episodes that I’ve ever done.”

Oh, we were thisclose to making it to the new series of DOCTOR WHO… thisclose, I tell ya, to beginning a new season without the traditional “Is the star leaving after this series?” non-story.

But, alas, we now have our first official “Is Capaldi out?” story.

Britain’s Daily Mirror tabloid asked the reigning Doctor, Peter Capaldi, if he has plans to exit the series. Peter replied:

“I sort of enjoy this position I am in with a kind of deep Scottish melancholy, because I know it has to end one day. I will cross that bridge when we come to it, which may be sooner rather than later.”

It sounds to me like he’s riffing on the reputation of Scots being morose, but of course The Mirror took this to mean Peter does not plan a long tenure. (Still, he won’t be the actor with the shortest tenure, since his two series still beat Christopher Eccleston‘s one.)

And don’t worry, folks, the annual “When will Clara really leave?” sweepstakes is still ongoing…