This comes as a bit of a surprise: I did not expect another promo clip for Marvel Television‘s new Jessica Jones series before its big release on Netflix, but here it is:

This trailer really paints a picture of the series: Jessica (Krysten Ritter) kicking some serious ass and Killgrave (David Tenant) being creepy as hell… It will be the Purple Man’s mental powers testing her physical prowess.

All 13 episodes of Jessica Jones will be available for download as of Nov. 20.

Netflix and Marvel Television have released a “motion poster” for their latest co-production, Jessica Jones, which will be released on Nov. 20. It appears the poster features all-new art by noted Daredevil comic book artist Alex Maleev.

Coming up this Friday is the first full trailer for the series, but in the meantime, we can have a look at the last teaser trailer, which features the voice of DOCTOR WHO’s 10th Doctor, David Tennant, as Killraven, a.k.a. the Purple Man, who appears to be the Big Bad for this season.

All 13 episode of the series will premiere at the same time on Netflix on Nov. 20.

All 13 episodes of Marvel’s JESSICA JONES  will debut on Netflix on Friday, Nov. 20, as Marvel’s second original series (after DAREDEVIL) in the studios’ co-production venture.

These photos are the first official images from the new series, and include Krysten Ritter (BREAKING BAD) as Jessica; Mike Colter (THE GOOD WIFE) as Luke Cage; David Tennant (DOCTOR WHO) as Killgrave, also known (in the comics) as the Purple Man; Rachael Taylor as Patricia “Trish” Walker, the Marvel Cinematic Universe’s version of Patsy Walker, a.k.a. the superheroine Hellcat in the comics; and Carrie-Anne Moss (The Matrix) as Harper, a new character created for this series. 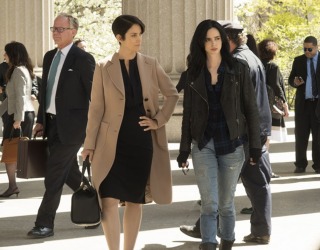 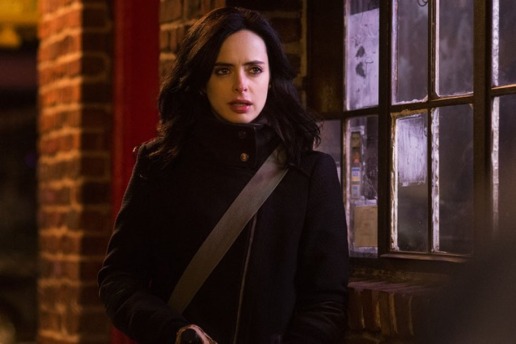 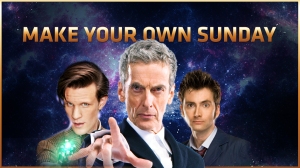 BBC America, the U.S. home of DOCTOR WHO, wants to know which episodes we fans think portray the Doctor in the most heroic light, so the network is inviting viewers to vote for the episodes to be included in an all-day marathon on Sept. 20 — the day after the premiere of series six.

Fans will get to choose from every story involving the latest incarnations of the Doctor: David Tennant‘s 10th Doctor, Matt Smith‘s 11th Doctor and Peter Capaldi‘s 12th.

According BBC America, here’s what to do:

1. Select a single episode from each poll on this page (one per Doctor) and cast your votes. The poll will stay open through Sept. 11 at noon EST.

2. Tune in to the DOCTOR WHO marathon all day Sunday to see which episodes made the cut.

David Tennant and Olivia Colman reprise their roles as Alec Hardy and Ellie Miller when BROADCHURCH returns for its second season on BBC America March 4, once again written by creator by Chris Chibnall, who won a Peabody Award for the first season of the soul-crushing mystery series.

Check out this extended trailer for the premiere:

So, my fellow DOCTOR WHO fans and I now have a big problem: Where are we allowed to look?

Ever since the Tenth Doctor (David Tennant) warned us not to blink lest we be set upon by Weeping Angels, we have been keeping our eye wide open. But now the 12th Doctor (Peter Capaldi) is telling us, “Don’t. Look. ’round.” What terror awaits those who risk it…?

So I ask: precisely where are we to focus our optical receivers — straight ahead and nowhere else?

The next episode of DOCTOR WHO series 8, “Listen,” airs this Saturday at 9 o’clock on BBC America. 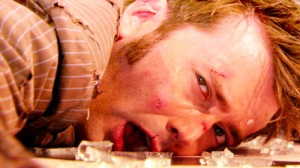 Just a few short hours away from the season eight premiere of DOCTOR WHO and executive producer Steven Moffat‘s introduction of Peter Capaldi as the 12th Doctor, I thought it might be fun to look back the abandoned plan Moffat had for series five if David Tennant had decided to stay on for another year.
END_OF_DOCUMENT_TOKEN_TO_BE_REPLACED

Sunday mornings here in America are known for serious-minded political talk shows about Important Issues, so here’s a clip featuring David Tennant, the former star of DOCTOR WHO, on Canada’s Space Channel show INNERSPACE comparing playing the Doctor to being the president of the United States.

One of British television’s greatest achievements was last year’s eight-part miniseries BROADCHURCH, which examined the agony of a small town after a child is found murdered. The series has been transplanted across the pond and reimagined for American audiences as the 10-part GRACEPOINT.

DOCTOR WHO’s David Tennant – who recreates his role from BROADCHURCH – and BREAKING BAD’s Anna Gunn star as the detectives charged with unmasking the killer before the town tears itself apart.

Chris Chibnall, who created and wrote BROADCHURCH, serves as an executive producer on GRACEPOINT and wrote the premiere episode, so he will be establishing the tone of the series. Hopefully he is allowed to keep things as intelligent and emotional as he was on the brilliant original. I’d hate to see that absolutely searing miniseries blunted and dumbed-down for Americans.
END_OF_DOCUMENT_TOKEN_TO_BE_REPLACED

I was thrilled when the Doctor called in his past (and future) incarnations to help save Gallifrey in the DOCTOR WHO 50th anniversary story “The Day of the Doctor,” but I was also disappointed that the sequence was so brief. Well, that problem has been solved by enterprising an enterprising YouTuber.

Yes, thanks to some clever splicing and re-editing, we have a meatier sequence of the Doctor helping himself! GALLIFREY FALLS NO MORE!