And this does. Gunn has brought in no less a cosmic entity than David Hasselhoff to break the news of Guardians on home video with an original song, “Guardians Inferno.” Grab hold of something and roll video:

END_OF_DOCUMENT_TOKEN_TO_BE_REPLACED

After focusing on Star-Lord’s relationship with his late mother in the first film, Guardians of the Galaxy Vol. 2 tackles Peter Quill’s missing father — who turns out to be Ego, played by screen legend Kurt Russell!

There’s a lot more to the story of Peter’s long-lost Dad than just who he is; readers of Marvel Comics know that when it comes to Ego the Living Planet, what he is poses a much… uh, bigger question.

Director James Gunn decided to change the identity of Star-Lord’s father from the comics, and hopefully we’ll see just why when the movie opens, but it’s worth noting that Russell‘s costume makes him look just like J’son, the emperor of Spartax, who was Peter’s dad in the comics. Hmmmm…

Anyway, check out the trailer, which is packed with action, bright colors and quick quips, which is just what we want from this sequel:

END_OF_DOCUMENT_TOKEN_TO_BE_REPLACED 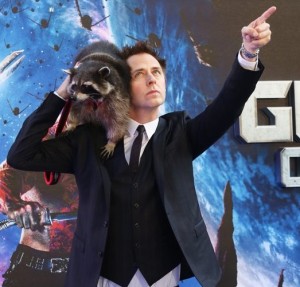 If you watched Sunday night’s 87th Academy Awards broadcast, you could not have missed – amid all the back-patting and self-love – a clear contempt for superhero movies, from host Neil Patrick Harris — y’know, the guy from the Harold & Kumar movies — to Jack Black‘s routine, there was a clear vibe that superhero movies are not art and not welcome.
END_OF_DOCUMENT_TOKEN_TO_BE_REPLACED

Marvel Studios announced at Comic-Con International: San Diego yesterday that Guardians of the Galaxy 2 has been greenlighted and slated for release on July 28, 2017.

Director/writer James Gunn will return to perform the same duties for the sequel.

Guardians of the Galaxy is set to be released this Friday.

Marvel Studios’ head of production, Kevin Feige confirmed that Oscar-nominated actor Josh Brolin plays the villain Thanos in Guardians of the Galaxy – and has signed a multipicture deal.

you may recall Thanos as the deep-space Big Bad who was revealed to have been pulling the strings in The Avengers. Well he’s a cosmic-level baddie, so it’s no surprise to see him pop up all over the place, including in GotG.
END_OF_DOCUMENT_TOKEN_TO_BE_REPLACED

The baddies and supporting characters of Marvel’s Guardians of the Galaxy are getting their chance to shine on a bunch of colorful character posters ahead of the Aug.1 release of the science-fiction action comedy.

The villains include Lee Pace as Ronan, Karen Gillan as Nebula and Djimon Hounsou as Korath. 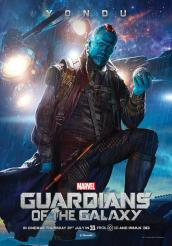 Guardians of the Galaxy director James Gunn told the Alamo Drafthouse magazine, BIRTH. MOVIES. DEATH., that the giant floating head seen in the trailers is, in fact, Knowhere, the Guardians’ headquarters, and just like the in the comic books, Knowhere is the skull of a dead Celestial.

We have a couple of Celestials who we refer to in the film. They’re part of the overall structure of the cosmic universe. They’re part of the fun of what the movie is. Our characters, to some degree, have super powers, but at the same time they’re just ordinary citizens of the galaxy. They just happen to be renegades – they’re basically bikers. They’re just these ordinary citizens who get caught up in this thing – because they want money in the beginning – that has completely cosmic overtones. There are characters like Thanos involved, and then there are characters [the Collector, the Celestials] bigger than that. Suddenly these mortals are playing in the fields of gods. I always find that a very interesting thing.

END_OF_DOCUMENT_TOKEN_TO_BE_REPLACED

Yeah, by now, you know what you’re gettin’ into with any new Guardians of the Galaxy trailer…

Guardians of the Galaxy director James Gunn has unveiled the first official image of Yondu, played by THE WALKING DEAD’s ex-Merle, Michael Rooker.

Sure, the image is a bit dark, but trust me, the guy has blue skin.

Gunn had this to say about the character and the actor on his Facebook page:

#gotgpicoftheday Michael Rooker onset as Yondu. You’ll be seeing more of him soon. Yondu was not in the original script. I added him and wrote the role specifically for Rooker. I wasn’t sure Marvel was going to go for either idea, so I was relieved when they responded enthusiastically to both.

END_OF_DOCUMENT_TOKEN_TO_BE_REPLACED

Whatever happens on Aug. 1, you won’t be able to say that Marvel’s marketing machine didn’t do its level best to get you into a theater to watch James Gunn‘s Guardians of the Galaxy. The teasers and various trailers have been phenomenally entertaining and really showcase the comic/serious tone of the movie. To wit, the latest entry:

How could you not want to see GotG after watching that? Is there another movie that can sell itself with The Runaways‘ Cherry Bomb?