After twice tweaking fans with behind-the-scenes footage, Stargate Command has finally released a teaser trailer that hints at what will happen in the series when it premieres on Feb. 15, 2018.

While it is difficult to piece together what might happen, we do see Catherine Langford (Ellie Gall) in the clutches of Nazi Germany’s dreaded SS; lots of guns and running; constellations (stargate addresses?), notably Orion, scrawled in a notebook; Egyptian-style architecture — and a stargate chevron locking on the symbol for Earth.
END_OF_DOCUMENT_TOKEN_TO_BE_REPLACED

Stargate: Origins, the new web-only series that reveals the untold story of Catherine Langford’s early adventures with the alien artifact, will premiere on the Stargate Command streaming service on Feb. 15, 2018.

The first two episodes (running about 10 minutes each) will be free to stream. while the remaining eight live-action installments will be exclusive to Stargate Command members.

A new teaser for the digital series, which we now know will be set in the World War II era, will drop tomorrow, Dec. 20.

The series, which recently wrapped production, has previously released two behind-the-scenes video clips (see the first one here), but nothing storyline related. 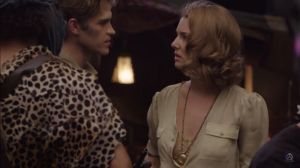 Production has wrapped on Stargate: Origins, the 10-episode web-only series that will serve as a prequel to the 1994 movie, the three live-action TV series, two direct-to-video movies and several comic book series. (We do not speak of the non-canon, short-lived animated series. Or the five non-canon novels.)

The new show focuses on Catherine Langford (Ellie Gall), whose father, Professor Langford (Connor Trineer, STAR TREK: ENTERPRISE; STARGATE: ATLANTIS) uncovers the stargate in Egypt in 1928. However, no one understands what it is. Presumably this series will explain how Catherine gets the idea that the giant metal ring is supposed to do something.

END_OF_DOCUMENT_TOKEN_TO_BE_REPLACED

STARGATE: ORIGINS is still some months away from its debut, but the first official set photos have been released, and Nerdist has shared the exclusive images with fans.

The 10-episode digital-only series will be a prequel to the 1994 theatrical film, the three TV series and handful of direct-to-DVD movies. Ellie Gall stars as Catherine Langford, the daughter of Professor Langford, played by Connor Trinneer (STAR TREK: ENTERPRISE). They are joined by new characters Beal (Philp Alexander) and Wasif (Shvan Aladdin). Also seen in the photos is series director Mercedes Bryce Morgan. 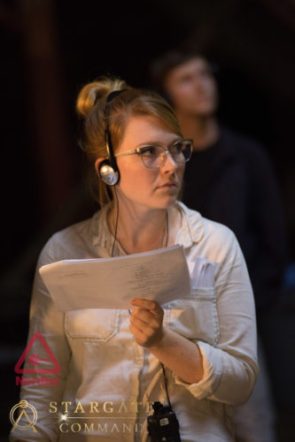 END_OF_DOCUMENT_TOKEN_TO_BE_REPLACED

The 2012 box-office misfire (but fan-adored) Dredd is a getting a sequel this fall — but probably not the one you expected.

Dredd executive producer Adi Shankar has just revealed that he spent the past two years secretly creating an online spin-off miniseries centering on Judge Dredd’s worst enemies, the Dark Judges: Death, Fire, Fear and Mortis. In case you’re unfamiliar, the Dark Judges hail from a parallel universe and believe life itself is a criminal offense!
END_OF_DOCUMENT_TOKEN_TO_BE_REPLACED

Executive producer Steven Moffat promises that there will be more online DOCTOR WHO content in the vein of The Night of the Doctor because he’s taking the new venue more seriously — and the BBC is giving him serious money to do it!

The Grand Moff credits Pond Life (the domestic adventures of Amy and Rory) with opening his eyes to the possibilities of online storytelling:

You suddenly realize something like Pond Life, which we took much more seriously, had an audience of over 6 million. You think, ‘Oh, wait, that’s a TV show!’ That’s just a TV show, and a lot of our audience make no distinction between that and the TV show.
END_OF_DOCUMENT_TOKEN_TO_BE_REPLACED