Remember The Usual Suspects, with its villainous mastermind, the mysterious international criminal, Keyser Soze? Of course you do; the film featured one of the most spectacular twist endings in movie history!

Ever wanted to know  more about how Keyser Soze got his start than was revealed in the movie?

Too bad! Red 5 Comics is going to fill in the story anyway, in a comic book series called Keyser Soze: Scorched Earth, which is billed as “the official origin” of the character.

Set nine years before 1995’s The Usual Suspects, the comic series will tell the story of how the young(er) Keyser Soze carved out his drug empire in the bad old days of President Ronald Reagan‘s War on Drugs.

There is no word on whether the comic has the rights to Kevin Spacey‘s likeness.

Yes, it’s 2015 and there are STILL no flying cars — although we are making progress on driverless cars — or hoverboards — but a couple of prototypes are in the pipeline — and I’m beginning to despair of ever seeing flying cars in my lifetime. Still, it’s not all bad.

Today is Oct. 21, 2015, the date Doc Brown (Christopher Lloyd) and Marty McFly (Michael J. Fox) visited in 1989’s Back to the Future Part II — which makes the dearth of flying cars all the more tragic.

However, in a bid to take some of the sting out of our lack of progress, Doc Brown himself has returned with a message about disappointing futures:

END_OF_DOCUMENT_TOKEN_TO_BE_REPLACED

Yes, this is going to be even bigger than the Star Wars Holiday Special….

This is a fun info graphic put together by the good folks at HalloweenCostumes that breaks down every lightsaber that has appeared onscreen in the films, STAR WARS: CLONE WARS and STAR WARS REBELS, whether used by Jedi or Sith.

This is just a bit of visual tomfoolery for those of us in the USA, because The Doctor Who Experience is way over in Blighty, but the exhibition has a new show biginning this Easter featuring Peter Capaldi in a spot of bother with the desktops in the TARDIS console room.

I love seeing grumpy 12 say: “I do miss proper buttons; everything’s so swipe-y these days!”

If you watched Sunday night’s 87th Academy Awards broadcast, you could not have missed – amid all the back-patting and self-love – a clear contempt for superhero movies, from host Neil Patrick Harris — y’know, the guy from the Harold & Kumar movies — to Jack Black‘s routine, there was a clear vibe that superhero movies are not art and not welcome.
END_OF_DOCUMENT_TOKEN_TO_BE_REPLACED

The good folks over at gaming site IGN apparently had a little free time on their hands, so they decided to make a video covering every X-Man in the Marvel Comics universe — ever. That’s a pretty daunting task on its own, but the editors also decided to try to explain X-Men continuity! They do a pretty good job for such an expansive subject.

It all goes by too quickly to be sure IGN got everyone, but it looks to be pretty inclusive.

The Doctor’s magickal girl transformation? Cybermen as Putties? A Dalek with legs? And that sonic screwsword? 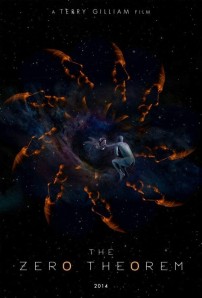 Remember when the Motion Picture Association of America (MPAA) rejected that Sin City: A Dame To Kill For poster because someone could make out a little too much of Eva Green‘s breast through her robe? Well, the trade panel has taken affront to a poster that shows all of Oscar-winning actor Christoph Waltz‘s rear end.

The poster teases the latest flick by director and sh!t-stirrer Terry Gilliam — Monty Python animator and auteur of such movie masterpieces as Brazil and 12 Monkeys (and the highly underrated The Adventures of Baron Munchausen) — and it’s called The Zero Theorem.

If you enlarge the above photo, you will notice that the tiny male figure is entirely naked. (See, ladies, it is not only the female body that offends America’s Puritanical Sensibilities.)
END_OF_DOCUMENT_TOKEN_TO_BE_REPLACED