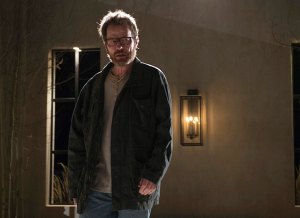 Congratulations, Vince Gilligan, you did it! As creator and executive producer of BREAKING BAD, you crafted a finale that totally lived up to the series, and you gave fans the ending they deserved.

In contrast to a lot of the high-tension episodes we’ve endured in the final run-up, this installment was almost elegiac as Walt shambled through town, tying up loose ends, settling grudges, healing wounds and saying goodbyes. It was a masterful way to end the series — leaving nothing ambiguous for viewers to fight over for years to come. BREAKING BAD was product of one vision — that of creator Vince Gilligan — and it was able to consistently confound and amaze viewers because it was true to Gilligan’s idea of the story, not network committees or viewer ratings. From first episode to last, Gilligan told his story the way he wanted to, now he has ended it his way. And that’s the way it always should have been.
END_OF_DOCUMENT_TOKEN_TO_BE_REPLACED

The final episode of BROADCHURCH began with Detective Inspector Alec Hardy getting his walking papers and literally walking away — but he also got his man, collaring Danny’s killer on his last day on the job. True, the murderer wanted to get caught, but Alec had his suspicions and would have got him even without Danny’s cell phone.

The best thing I can say about the BROADCHURCH finale is that lived up to it promise; the series got the ending it deserved. And, as the recently concluded DEXTER proved, that’s no easy feat.
END_OF_DOCUMENT_TOKEN_TO_BE_REPLACED

Just as you probably are, I’m sitting by my mailbox awaiting my copy of the DOCTOR WHO series seven box set, and while waiting we could use some entertainment. Enter: YouTube, which features one of the minisodes included in the box set to bridge the gap between episodes or, as in this case, merely to entertain.

Enjoy “Rain Gods,” featuring River Song (Alex Kingston) and in which Matt Smith reminds us why his departure from the title role is such a tragedy…

On the plus side, the complete seventh series will help pass the time until the 50th anniversary story, “The Day of the Doctor,” on Nov. 23. 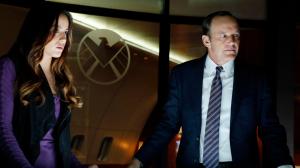 I can best sum up my feeling about AGENTS OF S.H.I.E.L.D. by saying that I really wanted to like it more than I did. And I did enjoy it; I just didn’t love it. Even though I wanted to love it.

It felt like the show was coasting too much on Executive Producer Joss Whedon’s reputation and its association with last year’s blockbuster The Avengers movie. I got the sense that the pilot was Joss slapping together a demo piece and telling the network, “This is just a placeholder; trust me, the real series will be great.” And, yes, the script was generously stocked with Whedonesque quips and Easter eggs, but I expected it all to be much more… well, polished.

As such, the pilot for AoS was pretty okay, but it demonstrated nothing close to its potential. It felt a bit like one of the characters, Grant Ward — shiny and a bit smug, and not as charming as it thinks it is.
END_OF_DOCUMENT_TOKEN_TO_BE_REPLACED

When it comes to BREAKING BAD, (almost) everyone’s a fan, and when you’re noted good-girl comics artist J. Scott Campbell, you can show your love for the show with pen and ink on Twitter!

No, Mr. Campbell did not turn Walter White and pals into his trademark voluptuous comics vixens — instead, he distilled the essences of several favorite male characters into illustrations with serious attitude!

BREAKING BAD ends its run this Sunday, so soon all we will have will be fan tributes like this.

After last week’s pilot did the heavy lifting of establishing the show’s premise and setting up the loopy (and complicated) mythology, the second episode of SLEEPY HOLLOW had the equally tough job of setting up and status quo of the ongoing series and, luckily, it did an excellent job.

It does look like SH will follow a “monster of the week” formula, with each creature filling in some of the mythology and giving us an excuse to learn Ichabod’s and Abbie’s  backstory. I do like the winking hubris of the script, suggesting that our two leads are fated to endure seven years of biblical tribulations — that stretch would get them well into syndication territory.
END_OF_DOCUMENT_TOKEN_TO_BE_REPLACED

The good folks over at Movies.com have spotted the greatest PEZ dispenser ever made, hands-down. It was created by artist Peter “Rat” Davidson, who, as far as I can tell, does not actually work for PEZ.

Too bad we cannot actually buy this.