GOTHAM is the prequel series that promises to tell the story of Gotham City before Batman came on to the scene; we’re supposed to learn how things got so bad that only a man in a bat costume could save it. There’s fertile ground for lots of stories here to expand the Batman universe – but it could easily go off the rails. Sadly, the premiere episode set a direction of shrinking that world.

The series focuses of straight-arrow newbie Det. James Gordon (Ben McKenzie) and his crooked veteran partner, Det. Harvey Bullock (Donal Logue), and we learn about the corruption-plagued town through the eyes of Gordon and the evolution of Gotham City’s more bizarre criminal elements. Seems like a solid premise.
END_OF_DOCUMENT_TOKEN_TO_BE_REPLACED

You do realize that Marvel Studios is about to drop a major superhero flick on Nov. 7, right? And it’s animated, right? Well, it is happening, and it’s called Big Hero 6. Disney has just released a new trailer:

END_OF_DOCUMENT_TOKEN_TO_BE_REPLACED 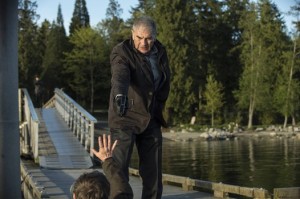 Finally, the story is picking up speed and things are happening. Well, relatively speaking. I still feel like INTRUDERS is spinning its wheels dragging out Madison/Marcus’ quest to get wherever he/she is going. And I’m really not sure how good a cop Jack was, since his entire investigation has been very rudimentary and somewhat random. He needs help.

It was good to see Robert Forster would be back – both because I predicted he would be (whew!) and because he always lends a sense of gravitas to whatever scene he’s in, and this story could use the weight. (Not to be confused with the leaden storytelling pace, of course.)
END_OF_DOCUMENT_TOKEN_TO_BE_REPLACED

It was bound to happen: A viewer has to expect a clunker episode every now and then, and “Time Heist” landed with a thud. Ironic for an episode that relied on an intricate plan, this story seemed to have no real idea where it was going. It feels like a collection of neat ideas for scenes and a monster strung together in a very disjointed manner. I almost get the feeling that the direction was purposely muddled to try and camouflage the story’s shortcomings. It didn’t work.

Can anyone think of a more convoluted way to accomplish a very simple goal – provided you can figure out what the point of the story was; no easy task. The reveal of the Doctor’s master plan left me asking the TV screen, “That’s it? That’s what he wanted to accomplish? And he did it that way?”
END_OF_DOCUMENT_TOKEN_TO_BE_REPLACED

Paramount Pictures has released a pair of new posters for Christopher Nolan‘s mysterious sci-fi drama Interstellar, and the results are decidedly mixed for me.

The first poster shows the (presumably) interstellar spacecraft built to try to save the human race, and while I really like the design, the image looks too much like poor Photoshop to me. I think the model used was too small, and it simply does not look right when blown up.

In other words, it looks fake.

The second sheet, featuring Matthew McConaughey‘s character staring into a starry sky with his daughter is a little too Field of Dreams for me. “If you built it, he will fly it.” It looks to be playing up the sappy father/daughter dynamic seen in the early trailers. I’m sure that’s perfectly fine for some, but it’s too saccharine for my taste.

After going for laughs last week with “Robot of Sherwood,” show runner Steven Moffat went for chills with this week’s script – and he succeeded on a very primal level. For TV, this was a damn scary episode, with some excellent atmospherics as opposed to the usual gore seen on shows like THE WALKING DEAD or HANNIBAL. In this DOCTOR WHO universe, the scariest thing in the universe is… a bedspread?

The Doctor’s quest to discover if any creature has mastered perfect camouflage – and what such a being might want – leads to an unexpected visit to the Doctor’s childhood, where Clara again has a huge influence over his life, ironically implanting ideas about fear and “the promise” implicit in the Doctor’s name.
END_OF_DOCUMENT_TOKEN_TO_BE_REPLACED

Finally, an excellent episode of INTRUDERS – one in which things actually happened and we could appreciate those things – and actually understand some of it, instead of turning away from the TV muttering, “WTF did I just watch?”

There was a palpable sense of suspense for the very first time. This time, writer Glen Morgan and director Eduardo Sanchez remembered Alfred Hitchcock’s rule for how to create suspense: by giving the audience information. True, Hitch meant giving us more than the characters get, and we’re not quite there yet, but… baby steps…
END_OF_DOCUMENT_TOKEN_TO_BE_REPLACED

Manning explained to Britain’s Radio Times what he was going for:

Slinky Miss Delphox was the starting point for this one. Keeley Hawes‘ publicity pic had such a great silhouette that I immediately wanted to include it. I did a poster for MAD MEN a couple of years back, using a similar treatment on Joan, and the idea stuck in my head.
END_OF_DOCUMENT_TOKEN_TO_BE_REPLACED

I’m expecting better from the Doctor…

Here is an introduction to the story from Peter Capaldi, Jenna Coleman and Steven Moffat:

END_OF_DOCUMENT_TOKEN_TO_BE_REPLACED

Here is a gallery of photographs to get you excited about this week’s episode of DOCTOR WHO: “Time Heist”: 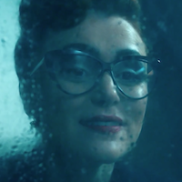 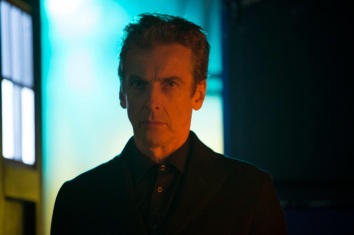