Kiefer Sutherland’s iconic Jack Bauer character returns in the reboot of 24 — now trimmed down to a lean 12 episodes — that finds international fugitive Jack trying to prevent the assassination of the U.S. president in London.

However, just like every other series of 24, no one believes Jack, and this time he’s being hunted by CIA operative Kate Morgan, played by CHUCK’s Yvonne Strahovski (last seen in the tragically disappointing DEXTER series finale).

As you can see, Chloe O’Brian (Mary Lyn Rajskub) is back, and William Devane’s James Heller has been elevated from secretary of defense (in 2007’s series) to president! Also glimpsed: Kim Raver as Audrey Raines! 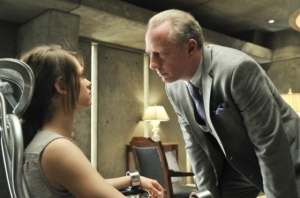 Percy (Xander Berkeley) had Nikita’s (Maggie Q) mole, Alex (Lyndsy Fonseca) in his power. Amanda (Melinda Clarke) wanted to interrogate her, but Percy wanted her canceled – until he learned that “Alex” is actually Alexandra Udinov, the daughter of a powerful Russian crime lord killed by Division. Then he decided to turn her against Nikita. Amanda tried to get information about Operation: Sparrow, but Percy stonewalled her. She and Michael (Shane West) tried to bluff each other that they were privy to more information than the other had. Percy really did have info that Michael didn’t: He knew Michael was cooperating with Nikita and Alex. Meanwhile, Nikita kidnapped an expert to figure out how to open Percy’s black box, believing it held the key to Operation: Sparrow. Percy sent Alex back in to “pull the trigger” on Nikita. The episode ended with a bang as Alex literally pulled the trigger and shot Nikita.
END_OF_DOCUMENT_TOKEN_TO_BE_REPLACED