Filming for Avengers: Age of Ultron has moved to Seoul, South Korea, and director Joss Whedon posted a message to the locals, apologizing in advance for turning the place into a superhero battleground.

Elsewhere, some enterprising paparazzo with a good lens shot these images of the Ultron stand-in on the set. I call it a stand-in because the character looks so silly, the armor strapped over a heavy winter coat. There is no way the Big Bad is going to look this ridiculous on the big screen. Obviously, there will be at least some CGI involved in conjuring the real Ultron. 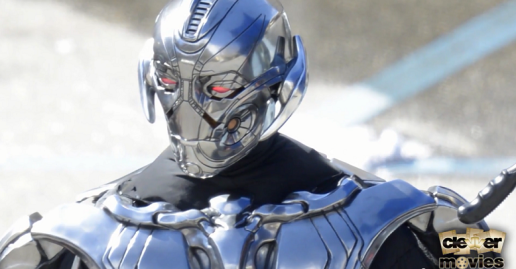 Still, I think it’s fun to see what the actors are working with; imagine you are Chris Hemsworth and you have to deliver your epic Thor lines to this guy!

There’s a new TV spot running for Dawn of the Planet of the Apes, and while it’s way short, it looks just as foreboding as the first trailer.

In case you cannot tell from the spot, here is the storyline, according to the official synopsis:

A growing nation of genetically evolved apes led by Caesar is threatened by a band of human survivors of the devastating virus unleashed a decade earlier. They reach a fragile peace, but it proves short-lived, as both sides are brought to the brink of a war that will determine who will emerge as Earth’s dominant species.

The Planet of the Apes Dawns on May 23. 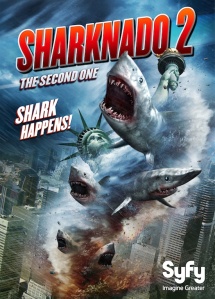 The hotly anticipated followup to SyFy’s instant classic, SHARKNADO, has been rescheduled to run a day earlier than previously announced. SHARKNADO 2: THE SECOND ONE will premiere Wednesday, July 30, at 9 p.m.

The cast includes original SHARKNADO survivors Ian Ziering and Tara Reid, along with newcomers Vivica A. Fox as an old friend of Ian’s Fin; Judd Hirsch as a NYC cabbie  (typecast much?); Andy Dick as a police officer; Judah Friedlander (30 ROCK) as a guy named Brian; Mark McGrath (Sugar Ray) as Fin’s brother-in-law; and Kelly Osbourne (THE OSBOURNES) as a flight attendant.

While the end of Matt Smith’s tenure as the 11th Doctor restored Gallifrey and set up the mystery of exactly where the planet is now, don’t be too surprised if the 12th Doctor fails to find his home planet in the eighth series of DOCTOR WHO. Or maybe even the one after that.

Frequent WHO scriptwriter Mark Gatiss (“Cold War”) — who will pen two episodes again this season— suggests a visit to Gallifrey might be a bad idea:

“Every time you go back to Gallifrey, it starts to make the Time Lords a bit too domesticated. I know that’s why Russell T Davies came up with the whole idea of the Doctor being the last one because eventually if you see them so often they become a bit like a bunch of MPs, whereas if you talk about them as this amazing, powerful force, they’re much more exciting.

“I don’t know if I would want to [write a Gallifrey episode]. I think the way the Time Lords were represented in “The End of Time” and “The Day of the Doctor” was very exciting because we’re seeing them in a crisis and they’re trying to come up with different ways of saving themselves.

“But I suppose if the Doctor ever does find Gallifrey again, then we might find out more. Who knows…”

I firmly believe it all comes down to the story. If you have a strong idea for a Gallifrey tale, then tell it; if you’re just looking for an excuse to show an alien planet, go somewhere else, please.

The same goes for anything else: The story must come first. If you have an absolutely killer Dalek story idea, then let’s see it. If not — if you could substitute any other monster without changing the tale appreciably then it’s not a Dalek story — don’t shoehorn the pepperpots in just because.

In her new thriller, Under the Skin, Scarlett Johansson plays an alien sent to Earth to prey on human males — and the seductress role in the film directed by Jonathan Glazer called for her to be naked. Quite a bit.

Not accustomed to such displays, Johansson had to psyche herself up for it — despite being one of the most beautiful women on Earth. She told Yahoo Movies:

“I’m a pretty private person. It’s not like I want to be displaying myself all over the place. But I think I realized that through the process of just letting go and allowing myself as the character to be totally present in the moment, and making the discovery of my own self, as [my character] does… I realized what kind of judgment I place on myself, and how self-conscious I am about all different kinds of things. That wasn’t just the nudity, but many different situations, where I just had to…. We just couldn’t capture what we needed unless I was totally free of myself. That, in a sense, was very liberating.”

Under the Skin opens this Friday, April 4. (Yes, Scarlett is going up against herself in Captain America: The Winter Soldier.) 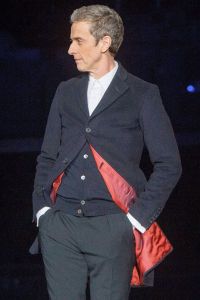 When Peter Capaldi was announced as the face of the 12th Doctor last summer, his reception was almost universally hailed as brilliant.

There was, however, one teeny-tiny little potential fly in the ointment: The actor had already appeared on the series in a significant guest role — as Caecilius in “The Fires of Pompeii.” And, not only that, he had also shown up in all five episodes of the TORCHWOOD story “Children of Earth,” as John Frobisher.

This is not unprecedented, even for a Doctor; Colin Baker previously played Commander Maxil before donning the hideous garb of the Sixth Doctor. But back then, fans didn’t have instant access to clips of the actor’s previous appearance, nor did they have the Internet (as it currently exists) to discuss/agitate/troll about it. Nowadays, “recycling” an actor gets noticed.
END_OF_DOCUMENT_TOKEN_TO_BE_REPLACED

Check out these awesomely amazing retro-flavored posters for Captain America: The Winter Soldier and X-Men: Days of Future Past. 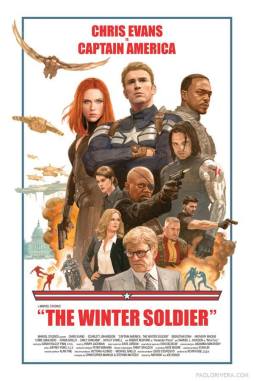 END_OF_DOCUMENT_TOKEN_TO_BE_REPLACED

This version of Lana and Andy Wachowski film feels very different from the first trailer; in this one, Mila’s Jupiter feels very much like a lovely victim swept along by events and “rescued” by handsome hero, rather than the kick-ass gal we saw in the first film. Also, it appears that maybe she’s not playing two roles, but rather Jupiter before and after accepting her royal destiny.

In any event, it looks like a pretty good summer popcorn film to me.

Check out this short film created by Sam Gorski and Niko Pueringer — two directors looking for financing at their page on Patreon.

What can I say? I loved this clip. I really loved it. Thanks to a breezy sense of fun, it feels way more like the “classic” Superman we all know and love — not the alien mass-murderer he became in Man of Steel.

Tom Cruise‘s latest sci-fi action flick — following on from Oblivion — is called Edge of Tomorrow, and is adapted from the novel All You Need Is Kill, by Hiroshi Sakurazaka.

Despite the soap oera-ish name, in the flick Cruise plays Col. Bill Cage, a soldier in a futuristic war against powerful aliens, who is repeatedly killed and mysteriously transported through time back to the day before he dies.