Filming Marvel’s Doctor Strange continues in Nepal and, thanks to The Kathmandu Post and the ubiquitous spies of Twitter, the first sightings of Chiwetel Ejiofor as Baron Mordo have surfaced.

Chiwetel joined the previously-spotted Benedict Cumberbatch (Stephen Strange) in Patan Durbar Square, to film scenes together. One photographer said it appeared that Mordo was Strange’s “guide” in the scenes.

Come, peer with me now into the all-seeing Orb of Agamotto for a glimpse into the future of the Doctor Strange movie: star Benedict Cumberbatch filming on the set in n Kathmandu, Nepal. 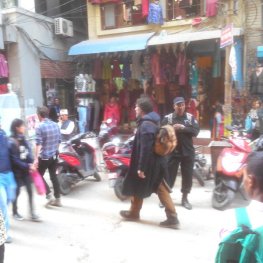 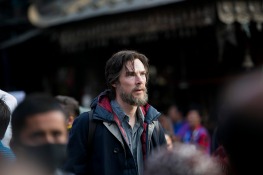 These scenes would appear to be set early in the movie, when disgraced surgeon Dr. Stephen Strange is searching for a cure for the nerve damage to his hands. I have to admit, it is cool to know that production has officially begun on the adaptation of my all-time favorite comic book character — even if I do have very mixed feelings about this production.

I am happy that the movie is being made, but I have serious issues with the casting of Cumberbatch in the lead. He’s a good actor, IMHO, but there has grown up around him a bloated fandom that feels almost like a cult of personality. I really do not understand the slavering awe and worship with which Cumberbatch is treated. It’s like he’s the greatest actor of all time. And this cult of personality will definitely clash with the movie. BC will tower over the film and distract from discussion of the film on it’s own merits.

It happened with Star Trek: Into Darkness. After he was cast, all anyone wanted to talk about was, “Who is Benecict playing? “Is he Khan?” “He’s Kahn, isn’t he?” (And, despite outright lying by the studio, he indeed was playing Khan.) I just don’t want everything about Doctor Strange reduced to whether the Cumberbitches (look ’em up) like his hair in a particular scene.

It’s just not fair that my guy is likely going to be crushed under the weight of his own star. But hey, I should be grateful that Marvel and Disney are willing to pour some cash into this production — unlike the 1978 TV movie made for CBS. And, yes, Cumberbatch is an improvement on Peter Hooten.

Here is a mighty selection of photographs taken during the filming of this week’s episode of DOCTOR WHO, “Robot of Sherwood” at Caerphilly Castle in South Wales, featuring Peter Capaldi as the 12th Doctor and Jenna Coleman as Clara. 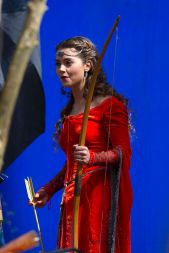 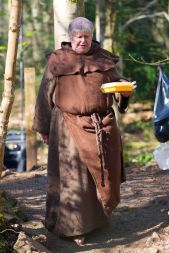 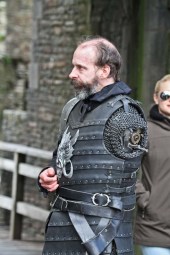 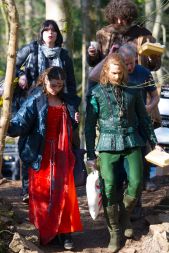 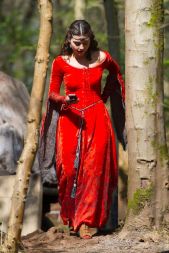 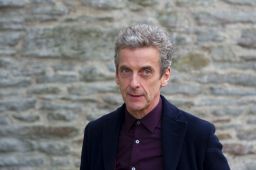 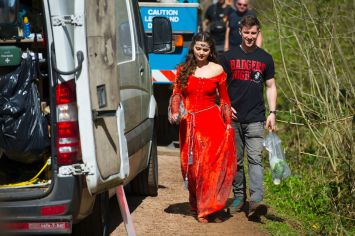 “Robot of Sherwood” airs tomorrow at 9 p.m. on BBC America.

The 12th Doctor teamed with a trusted ally while encountering a dogged old foe as Peter Capaldi continued to film his debut series of DOCTOR WHO on the streets of Cardiff, Wales, yesterday (June 30).

While Jenna Coleman, who plays the Doctor’s assistant, Clara, was not glimpsed on the set, Capaldi was joined by guest star Michelle Gomez, who was portraying “the Gatekeeper of the Nethersphere.”

Wales Online captured a large number of photos of the location filming at The Friary in the middle of Cardiff, but I put the gallery after the cut because the images are very spoilery.
END_OF_DOCUMENT_TOKEN_TO_BE_REPLACED

Today marks the start of principle photography on J.J. Abrams‘ Star Wars: Episode VII, and this is the first official set photo, tweeted by production company Bad Robot with the only caption being #dayone.

The first slate offers no clues about the official title of the episode, even as speculation continues to swirl that it will be called The Ancient Fear.

However, notice the sprinkle of sand on the clapper board — does that suggest an exterior on Tatooine?

Robert “Iron Man” Downey Jr. Tweeted out his first official pic from the set of Avengers: Age of Ultron, and it is… well, not exactly action-packed.

The image shows RDJ in a yellow reflective vest, standing next to executive producer Jeremy Latcham.

Well… perhaps that purple jacket Downey is wearing is part of his Tony Stark costume?

Well, there’s now photographic proof that one of the characters/monsters Peter Capaldi‘s 12th Doctor was rumored to encounter in series eight of DOCTOR WHO is definitely happening!

If you don’t want to know who/what it is, then move along to something else. If you do wish to know, then make the jump — but beware: SPOILER!
END_OF_DOCUMENT_TOKEN_TO_BE_REPLACED

Some sneaky set photos from filming the eighth series of DOCTOR WHO have given us a close look at the 12th Doctor (Peter Capaldi) wearing a different costume — a long lab coat with pens in the breast pocket (probably a disguise) — and using what has been described as a new sonic screwdriver, although the close-up image shows it to be essentially identical to one used by his 11th incarnation. And then there’s that new monster, which looks to me like a giant mechanical owl! 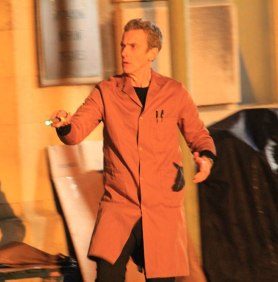 The only difference I can (almost) perceive in the sonic is that it may be all gold in color instead of having a silver cylinder — but that can be put down to the low lighting of the photos.

As for the new monster, it’s being referred to as an alien, and I’m going to call it the Owlbot until someone tells me different — or I think up a better name. (But, seriously, I’m not gonna improve on Owlbot. Who could?)

Filming for Avengers: Age of Ultron has moved to Seoul, South Korea, and director Joss Whedon posted a message to the locals, apologizing in advance for turning the place into a superhero battleground.

Elsewhere, some enterprising paparazzo with a good lens shot these images of the Ultron stand-in on the set. I call it a stand-in because the character looks so silly, the armor strapped over a heavy winter coat. There is no way the Big Bad is going to look this ridiculous on the big screen. Obviously, there will be at least some CGI involved in conjuring the real Ultron. 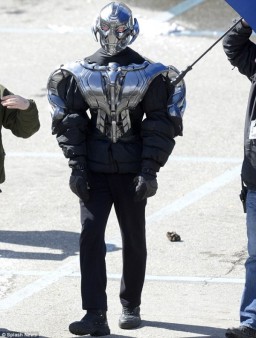 Still, I think it’s fun to see what the actors are working with; imagine you are Chris Hemsworth and you have to deliver your epic Thor lines to this guy!

Is this a Nimon I see before me?

Not only were lead actors Peter Capaldi and Jenna Coleman spotted shooting a series eight story for DOCTOR WHO on location in a park, they were shooting with a monster of unfamiliar design that many folks on the interwebs are suggesting could be a redesigned Nimon! Judge for yourself: 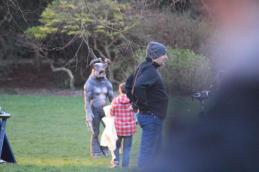