The BBC is treating DOCTOR WHO fans to a plethora of promotional video material to mark the 12th Doctor’s first adventure with his mortal enemies, the Daleks!

The Doctor has his most interesting patient yet, eh?
END_OF_DOCUMENT_TOKEN_TO_BE_REPLACED

Just a few short hours away from the season eight premiere of DOCTOR WHO and executive producer Steven Moffat‘s introduction of Peter Capaldi as the 12th Doctor, I thought it might be fun to look back the abandoned plan Moffat had for series five if David Tennant had decided to stay on for another year.
END_OF_DOCUMENT_TOKEN_TO_BE_REPLACED 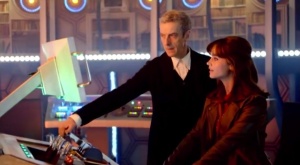 The BBC has released the titles and writers for all 12 episodes of series 8 or DOCTOR WHO, Peter Capaldi‘s debut as the 12th incarnation of the Doctor.

END_OF_DOCUMENT_TOKEN_TO_BE_REPLACED

This is the official teaser for the first episode. I can barely wait!

A proud running joke keeps on running: “You’ve redecorated. I don’t like it.”

It’s a 75-minute episode, to be shown on TV and in select movie theaters on Aug 23.

The 12th Doctor (Peter Capaldi) has a very simple command:

Finally, after a couple of all-too-brief teasers, we get a full trailer for the new season of DOCTOR WHO, starring Peter Capaldi and Jenna Coleman — but it’s still too short!

So, now we know for sure we can look forward to the return of the Daleks, more dinosaurs (this time, not on a spaceship), some new foes and, of course, lots of explosions. But there apparently will be more than a little soul-searching by the Doctor, who wonders if he’s a good man and wants to atone for the mistakes he’s made. This definitely looks like the “darker” season with a more “dangerous” Doctor that we’ve been promised.
END_OF_DOCUMENT_TOKEN_TO_BE_REPLACED

At last, the BBC has released a teaser trailer for the eighth series of the revived DOCTOR WHO, and while it runs just about 15 seconds, we do get to see a new logo and — more importantly — a confirmed start month for the Peter Capaldi era on BBC One and BBC America: August.

There is not much more than a brief, dramatically backlighted glimpse of the 12th Doctor in an exploding TARDIS console room, but at least it’s something.

It is believed (but not certain) that the 12- or 13-episode series will run uninterrupted by a hiatus like the one that seemed to dull viewer response last season.