Here are some images from a couple of anticipated blockbusters — and something a little different for action/adventure/Sci-fi director Ridley Scott. 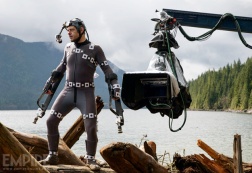 I’m pretty sure we’ve seen enough of Electro from summer’s The Amazing Spider-Man 2, so now I want to know more about the Rhino. Please, please, please, don’t let him actually turn out to be a Zord straight out of MIGHTY MORPHIN’ POWER RANGERS!

Seeing Andy Serkis in a motion-capture suit is pretty much a guarantee that something special is going to be happening on Dawn of the Planet of the Apes. You can see the fruits of some his work in the DotPotA teaser trailer.

Finally, I hope Christian Bale doesn’t use his hoarse Dark Knight whisper in the biblical epic Exodus. It already will quite a shock when a chestburster pops out of Pharaoh — not to mention how out-of-place batarangs are going to look during the climactic battle sequence!

The WordPress.com stats helper monkeys prepared a 2013 annual report for this blog.

The concert hall at the Sydney Opera House holds 2,700 people. This blog was viewed about 41,000 times in 2013. If it were a concert at Sydney Opera House, it would take about 15 sold-out performances for that many people to see it.

A few more images from Captain America: The Winter Soldier have been released to either help tide us over until April 4, or to make the torture of the wait that much more exquisite…

Wojciech Kilar, who composed my favorite film score ever, for Bram Stoker’s Dracula, died in his hometown of Katowice, Poland, on Sunday at the age of 81 after a long illness.

Kilar’s haunting, otherworldly score for Francis Ford Coppola’s film was a major contributor to the menacing atmosphere of the 1992 version of the Dracula story, which starred Gary Oldman, Winona Ryder and Anthony Hopkins.

The music was at once heavy, dramatic and unsettling but also at points light and romantic, befitting the mood shifts in the flawed but wonderful film. Compare the prickly, skin-crawling horror of the atonal passages that morphed into boisterous timpani pounding and trumpets during the attack of Dracula’s brides to the music box-like simplicity and innocence of Lucy’s theme. And then there was the peerless main theme that swells with the power of love, hatred and revenge!
END_OF_DOCUMENT_TOKEN_TO_BE_REPLACED

Jenna Coleman, who plays “The Impossible Girl,” Clara Oswald, said exactly what most of us fans were thinking about Matt Smith passing the torch to the new star of DOCTOR WHO, Peter Capaldi, calling the emotional transition “brutal.”

It’s easy to imagine that Clara’s fraught face and teary eyes involved no acting whatsoever, and, indeed, if you watch the making-of video I posted yesterday, she had trouble getting through the first table-read of “The Time of the Doctor,” during which Matt actually broke down. Here’s how Jenna described shooting the actual scene:

“I knew it was going to be sad, but it was really traumatic. It was very emotional and overwhelming. It’s a strange thing [but] it’s the nature of the show. Matt leaves, Peter arrives in [Matt’s] costume and the scene carries on. You just keep going — that’s the show.”

I am very interested to learn how her relationship with Capaldi develops when they get into filming series eight — which could begin as soon as next week!

Gal Gadot, the actress who would be Wonder Woman, has responded to knee-jerk fandom criticism of her casting in Zack Snyder’s upcoming Man of Steel sequel, Batman vs. Superman.

Seemingly within moments of the announcement of Gadot winning the role, the bashing started: “not pretty enough,” “too skinny,” “her boobs aren’t big enough” — the backlash against this virtually unknown actress (most recognized for a smallish role in the Fast & Furious franchise) got ugly fast.

Gadot was rather inelegantly interviewed by top Israeli entertainment show GOOD EVENING WITH GAI PINES recently, and got a chance to deflect the mean-spirited bashing:

Q: It’s been said that you’re too skinny for the part. Wonder Woman is large-breasted, is that going to change?

Hmm. I represent the Wonder Woman of the new world. Breasts… anyone can buy for 9,000 shekels and everything is fine. By the way, Wonder Woman is Amazonian, and historically accurate Amazonian women actually had only one breast. So, if I’d really go ‘by the book’… it’d be problematic.
END_OF_DOCUMENT_TOKEN_TO_BE_REPLACED 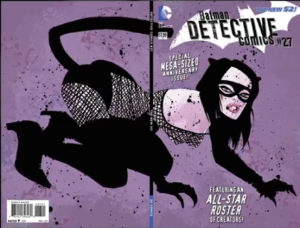 The latest reboot of DC Comics’ flagship Detective Comics title reaches the culturally significant milestone issue No. 27 soon, and so modern legend artist Frank Miller was commissioned to create a two-page spread for the interior of the issue featuring Catwoman.

The original Detective Comics #27, published in May 1939, featured the debut of Batman — called “The Bat-Man” — as well as the first appearance of Commissioner Gordon.

The big wigs at DC decided that the Miller image should become a variant cover. Then that variant cover was canceled (allegedly over a dispute between DC and Miller over increased compensation for bumping the drawing to coveted cover status).

Then retailers revolted over the cancellation, because orders were placed on the basis of getting a highly desirable and collectable (read: license to print money) Frank Miller variant cover.
END_OF_DOCUMENT_TOKEN_TO_BE_REPLACED

Curious to know even more about “The Time of the Doctor” — specifically, how much work went into creating Matt Smith’s memorable Christmas swansong as the 11th Doctor? Check out this official BBC video!

Warning: MAJOR SPOILERS AHEAD! While showing us how the episode was made, significant plot reveals are revealed and spoilers are spoiled, so if you haven’t actually seen “The Time of the Doctor,” well — it’s time for you to see a Doctor! Also, major feels ahead, including sobbing from brokenhearted cast members. Grab some tissues before clicking!

The wait for the 12th Doctor will be excruciating!

I know this happened just a few days ago, but I am still sad to see Matt Smith leave the title role in DOCTOR WHO, and so I find myself watching his regeneration scene over and over.

Let’s share our grief — and hopes for the future with the next Doctor, Peter Capaldi — with this clip of the 11th Doctor’s final moments from “The Time of the Doctor.” Oh, the feels…

Capaldi’s first story as the Doctor is not expected to air until August or September, so settle in for a long wait…

Talk about late to the party! Marvel Studios has finally confirmed what fandom has known at least since August: Vin Diesel is voicing the CGI character Groot the living tree in next summer’s live-action film, Guardians of the Galaxy.

Perhaps recognizing that there’s not much to add, Marvel’s press release about the casting didn’t say much:

Vin Diesel is Groot! The star of the Fast and Furious and Riddick franchises will lend his voice to Groot in Marvel’s live-action Guardians of the Galaxy.

Yep it is completely official, AND he’s amazing. I never knew someone could say I AM GROOT so many different ways and with such feeling (and that sounds like I’m kidding but I’m not!)