Anyone who knows me knows that one of the movies I am most looking forward to in 2012 is John Carter, an adaptation of a story written by Edgar Rice Burroughs (creator of Tarzan) almost 100 years ago. It bothers me a little that the adaptation is not being called “John Carter of Mars,” because the moniker “John Carter” is just so… blah. The flick has been flying mostly under the radar despite being released by Disney, which has not turned its marketing department loose on the property. Well, until recently, when the studio released a couple of teaser images, and finally an actual trailer. And now I can say the short clip was worth the wait!

END_OF_DOCUMENT_TOKEN_TO_BE_REPLACED

Transformers: Dark of the Moon plays like an amalgam of discarded and leftover parts from previous installments in the giant-robot series, and the rickety result is one junker of a movie.

As near as I can piece together, the good Autobots and bad Decepticons both set their sights on technology from their home planet Cybertron that has been uncovered on Earth. (Turns out the entire space race of the 1960s was focused on getting to the moon and examining an Autobot ship that crashed there in 1961.) The Decepticons recruit wealthy playboy Dylan (Patrick Dempsey) as their agent, because he employs Carly (Rosie Huntington-Whiteley), the girlfriend of Sam (Shia LaBeouf), who helped the Autobots defeat the Decepticons twice before but now finds himself inexplicably unemployed. The Decepticons trick the Autobots into going to the moon and recovering not only the super tech, but the deactivated former leader of the Autobots, Sentinel Prime (voiced by sci-fi legend Leonard Nimoy), because only Optimus Prime (Peter Cullen) can revive him. After a lot of fighting and explosions, Sentinel Prime sides with the evil Megatron (Hugo Weaving) against his protégé, Optimus, and helps the Decepticons teleport Cybertron to Earth.
END_OF_DOCUMENT_TOKEN_TO_BE_REPLACED 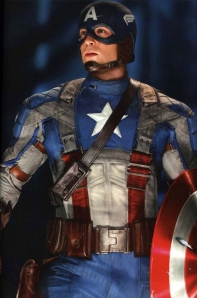 Captain America: The First Avenger outranks every other superhero film released this summer, joining Harry Potter and the Deathly Hallows: Part 2 as the elite genre movies of 2011.  It is a rollicking adventure yarn; the kind they used to make all the time.

The film benefits immeasurably from its World War II-era, old-fashioned good guys vs. bad guys simplicity, which paints Cap as a hero for whom we can all cheer, up against villains everyone can hiss. Director Joe Johnston (The Rocketeer) takes the time to sketch in Steve Rogers’ character and establish him as a paragon long before he takes up that symbolic shield to defend the free world against the worst of the worst: the Red Skull and Hydra, a renegade branch of even more evil Nazis.

Captain America:The First Avenger tells the story of Steve Rogers (Chris Evans) a 4-F runt desperate to fight the Nazis in Europe. Impressed by the youngster’s pluck, German refugee Dr. Abraham Erskine (Stanley Tucci) enrolls Rogers in a secret scientific program to create a “super-soldier” to win the war. Erskine’s secret serum transforms the puny Rogers into the ultimate physical specimen, a strapping guy gifted with superhuman strength, endurance and healing powers. But no sooner is the experiment a success than an Axis agent murders Erskine, and the secret to creating more super-soldiers dies with him. Rogers is detailed to the PR circuit to sell war bonds, but when his best friend is captured by the Nazis, Rogers parachutes behind enemy lines to rescue him – and 400 other prisoners – and then takes his place as a true super-soldier.
END_OF_DOCUMENT_TOKEN_TO_BE_REPLACED

Horrible Bosses works to the extent that it does thanks to some fine comic performances, as the actors toil to rise above a spotty, labored script and deliver some laughs.

The story sees three mismatched buddies plagued by evil “superiors” at work. Ambitious Nick (Jason Bateman) has had his promotion hijacked by oily superior David (Kevin Spacey), while Kurt was knocked off-track when his beloved boss Jack (Donald Sutherland) died, leaving his troglodyte son, Bobby (Colin Farrell), to wreak havoc at the previously placid company. Dale’s (Charlie Day) problem is quite different: The engaged dental hygienist is being sexually harassed by dentist Julia (Jennifer Aniston) in a way that goes way beyond innuendo and spraying water on his crotch. When the boys are unsuccessful at hiring a hit man, they decide to kill each other’s bosses themselves.
END_OF_DOCUMENT_TOKEN_TO_BE_REPLACED

Harry Potter and the Deathly Hallows: Part 2 represents not only the creative zenith of the entire series, it is easily one of the most satisfying films of 2011 – and stands among the very best examples of fantasy filmmaking.

Director David Yates, the wizard behind the final four films, is masterfully in control here, setting an elegiac tone from the very beginning, with a muted color palette in eerie tableaux like Hogwarts surrounded by eerie floating Dementors who are just…waiting. The story sees Harry (Daniel Radcliffe), Hermione (Emma Watson) and Ron (Rupert Grint) trying to complete the mission begun in the previous film, to destroy the Horcruxes – mystical objects that hold pieces of Lord Voldemort’s (Ralph Fiennes) soul – so Voldemort can be killed before the villain murders Harry. That relatively straightforward plot ignites an intricately interlocking and exciting story that builds to a Brobdingnagian battle for Hogwarts – and Harry’s life – at the movie’s climax. The magical war is fought with stellar visual effects and swooping, looping cameras that propel viewers into a thicket of crackling curses and tumbling rubble. The dragon is amazing, the fights look as realistic as magic ever could, seamlessly blending CGI and live actors.
END_OF_DOCUMENT_TOKEN_TO_BE_REPLACED

I’m very excited to find a bona fide trailer for The Thing – no, not the 1982 John Carpenter film, but rather a new prequel to that particular horror classic. I know, it’s confusing to use the same title, but it could have been worse, had it been granted a typical Hollywood prequel title. Would you pay to see something called, say, “The Thing: The Freezing“?

This prequel is set just before Carpenter’s flick, and explains what happened at the Norwegian camp where the alien lifeform was actually discovered. (Carpenter fans will recall his movie opening with the Norwegian helicopter chasing the Thing in dog form.) The new film stars Mary Elizabeth Winstead (Death Proof) as American paleontologist Kate Lloyd, who is called in to consult when Norway’s Antarctic researchers find some…thing really strange in the icepack.

END_OF_DOCUMENT_TOKEN_TO_BE_REPLACED

I’ll give COVERT AFFAIRS props for digging up an unusual baddie, in the form of South America’s FARC (which stands for Revolutionary Armed Forces of Colombia), a Marxist insurgency that began in 1964 and has pretty much faded from North American consciousness lately. Utilizing a real-world threat – especially one that hasn’t been done to death already – added a lot of verisimilitude to the story.

Another thing COVERT AFFAIRS did right was introduce Thor’s Jaimie Alexander (Sif) as Reva Kline, who was taking Auggie’s role as Annie’s tech op. Alexander managed to get noticed in this summer’s big superhero action flick, and she made an impression here as a somewhat icy “Alpha Barbie” who is better with computers than people. Annie was understandably devastated that Auggie’s promotion meant he was moving on without her, but to her credit, she did her best to work with Reva.
END_OF_DOCUMENT_TOKEN_TO_BE_REPLACED

Right from the air-hockey-playing, Fast Times at Ridgemont High-quoting opening, this episode of SUITS was a great leap forward from the lugubrious, unimaginative pilot. This show would have been a much more amicable way to invite viewers to watch a new series. Alas, I know that the episode benefits from last week’s tedious scene-setting, but it makes me wish that the pilot’s ham-handed exposition could have been handled more gracefully.

The key to this story’s appeal came in humanizing the characters, who were all wretched in pilot. Mike’s inexperience had real consequences this week, as did Harvey’s reputation as a womanizer. Rachel actually helped Mike, and even Louis showed some humanity by trying to take Mike under his wing — or, rather, trying to exploit him. It didn’t work out, but it was humanizing.
END_OF_DOCUMENT_TOKEN_TO_BE_REPLACED 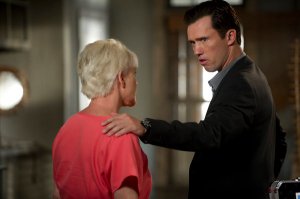 This episode may have marked Michael’s first official mission back on the Company payroll, but the story belonged to Madeline, and Emmy-winner Sharon Gless made the most of her chance to shine. Gless showcased her range as she made Maddie tough yet vulnerable, determined but unsure, as she bulled her way into Michael’s case of the week – and lived to regret it.

Michael’s (Jeffrey Donovan) first CIA mission is babysitting British scientist Carson Huxley (Daniel Gerroll), an eccentric with a roving eye. Of course Jesse (Coby Bell) picked that moment to ask Michael to help with a moonlighting job: Helping a woman rescue her cousin from human traffickers. Sam (Bruce Campbell), Fiona (Gabrielle Anwar) and Jesse capture Takeda (Brian Tee), but he is badly injured, so Sam convinces Michael to let Maddie play nurse. She bonds with the prisoner, who takes her into her confidence when Michael mistreats her. Eventually, Maddie tricks Takeda into leading Michael and crew to the place where the slaves are stashed. Michael enlisted Fi to charm Huxley, but instead she played barracuda and scared him into running back to his wife.
END_OF_DOCUMENT_TOKEN_TO_BE_REPLACED