Finally, some good news from across the pond — and on these shores — to delight my fellow DOCTOR WHO fans! The 11th Doctor (Matt Smith) is returning a tiny bit sooner than expected — but what else would you expect from the Time Lord with questionable timing?

The BBC has announced that the second half of season seven will premiere on Saturday, March 30. And BBC America has confirmed that it will air the new episodes on the same day as the BBC. There will be eight new episodes, so the show is looking at a May finale, just like many American series. (BTW, the finale has been shooting in Scotland, leading to speculation that the story is set… in Scotland. Possibly in the Victorian Age.)

Surely you remember that the Christmas Special, “The Snowmen,” left us with a cliff-hanger revelation about Clara Oswin Oswald (Jenna Louise Coleman), and that lead writer Steven Moffat has promised to tease us with clues about her. Personally, I like the idea of this mysterious companion, since we haven’t seen this sort of intrigue since Turlough and the Fifth Doctor.
END_OF_DOCUMENT_TOKEN_TO_BE_REPLACED

But, hey, Howard did much more than unleash a barbarian on pop culture. He helped shape modern pop culture by fathering the “sword and sorcery” subgenre of fantasy and contributing to Lovecraft’s horror mythos. Howard came up with a number of other vivid characters, including Solomon Kane, Kull the Conqueror,  Sailor Steve Costigan, Cormac Mac Art, Bran Mac Morn, El Borak and James Allison — notable for being disabled. I have previously looked at REH’s life, which tragically ended in suicide, so now I turn to his literary output.
END_OF_DOCUMENT_TOKEN_TO_BE_REPLACED

Could it be true? Could the collective greatest dream of DOCTOR WHO fandom come true in this, the series’ 50th anniversary year? I am referring, of course, to a special episode featuring all the living actors who have played the Doctor. But the newest rumor bouncing around the Internet today is that Steven Moffat is penning an episode incorporating all 11 Doctors — played by their original actors!

Now, before we get all teary-eyes over the prospect of David Tennant’s 10th Doctor working alongside Peter Davison’s Fifth Doctor once again, or Matt Smith’s barking mad 11th Doctor getting a hand from Patrick Troughton’s fussy Second Doctor, we need to take a deep breath and note that this is nothing more than a rumor.

And not even a very solid one, at that. The Birmingham Mail newspaper printed a story about an 11-Doctor special this morning without any sourcing or quotes — a sure sign that the story should be taken with a huge grain of salt (if not the entire salt shaker). Plus, certain details mentioned don’t really ring true.
END_OF_DOCUMENT_TOKEN_TO_BE_REPLACED 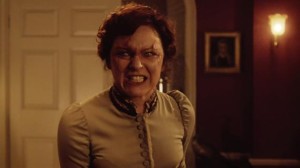 Who’s this? It’s Rachael Stirling as Ada Gillyflower in “The Crimson Horror.”

When the back half of series seven of DOCTOR WHO finally commences — most likely sometime in April — there will be some scary stuff coming down the pike, according to the director of two of those episodes, Saul Metzstein.

The first up is episode 11, “The Crimson Horror,” by Mark Gatiss (his second story in this half of the season, following episode 8). Metzstein describes it thusly:

“It’s very tight, and has its own peculiar particularities. Its own unique flavor. It’s very funny. Terribly creepy. It’s from that genre of DOCTOR WHO where the Doctor doesn’t appear till some way into the episode. I’ve been watching some old DOCTOR WHO, and it’s that type of episode. Also, it has a massive flashback in the middle of it, which is unusual for a program about time-travel! I like its odd structure.”

The director is also helming the finale, penned by Steven Moffat, but is far more closed-mouthed, saying only, “It has genuinely scary monsters. Wait and see!”

SPOILERS! Details of Neil Gaiman’s story are revealed after the cut…
END_OF_DOCUMENT_TOKEN_TO_BE_REPLACED

We all know Joss Whedon’s The Avengers was nominated for just one single Academy Award — for special effects — but it should win the prize in a walk. Just to remind everyone how awesome and detailed the SPFX were, Industrial Light & Magic has released a special clip that demonstrates how some of the visuals were achieved.

Pretty amazing, if you ask me. (And I really love this kind of “how they did it” feature, so DVD/Blu-ray has been a real boon to me.) These were the effects The Avengers deserved.

Anyway, here’s what ILM had to say about the reel:

“We are proud to present this video, which showcases some of ILM’s Oscar nominated effects work for the 2012 hit film, Marvel’s The Avengers. This reel represents a small fraction of the work created by over 200 ILM artists, scientists, and engineers backed up by a world class production team.”

By the way, did everyone notice that the Oscar nomination list referred to the title of this film  as Marvel’s The Avengers?

Here is the complete list of nominees for the 85th Academy Awards — without any snarking from me. The Oscars will be handed out on Feb. 24.

“Beasts of the Southern Wild”

END_OF_DOCUMENT_TOKEN_TO_BE_REPLACED

Director Guillermo Del Toro, bless his geek heart, has decided to take another run at getting his dream project — a faithful adaptation of H.P. Lovecraft’s classic tale At the Mountains of Madness — off the ground and into multiplexes.

The Mexican maestro is so dedicated to this project that reviving ATMOM was one of the reasons Del Toro turned down a chance to direct Star Wars — Episode VII!

Del Toro had gotten pretty far into preproduction on ATMOM with none other than Tom Cruise in the lead role way back in 2011 when Universal suddenly pulled the plug, nervous about the flick’s unavoidable R rating and a budget that was anything but cheap.
END_OF_DOCUMENT_TOKEN_TO_BE_REPLACED 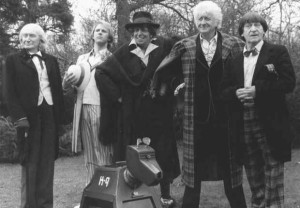 Three Doctors, a recast, a wax statue and a tin dog = “The Five Doctors”

In the run-up to 2013, the 50th anniversary year of DOCTOR WHO, fans were giddy with anticipation of all sorts of spectacular celebrations — multiple TV specials and tributes and great programming, not least of which would be a huge, thrilling multi-Doctor story bringing in as many of the surviving Doctors as possible.

Well, some kind of multi-Doctor story is still a (vague) possibility (and fading fast), but all that other stuff? Not so much. According to the BBC, all dedicated fans will be seeing is one anniversary story airing on Nov. 23 and the previously announced “docu-drama” from Mark Gatiss on the origin of the show, AN ADVENTURE IN SPACE AND TIME.

Oh, we will still get the second part of series seven, kicking off in April, but after the anniversary show, there’s just a Christmas Special and then 2013 is over. No beginning of series eight, no additional Doctor stories at all. In fact, series eight isn’t even officially confirmed! One would hope the least the Beeb could do is not torture fans by delaying the announcement of the next series. But no, it appears the BBC is content to be cruel again. 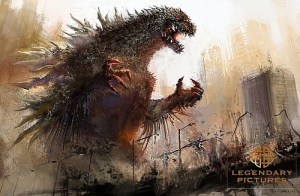 Concept art for the Godzilla reboot by Legendary

That surprise Godzilla reboot that we — and by we I mean me — were suddenly salivating over has hit a few creative bumps in the road. Don’t worry, director Gareth Edwards (Monsters) is still onboard, but the producers who have been shepherding the project have been jettisoned.

But first the good news: Frank Darabont — who developed THE WALKING DEAD for AMC — has been tapped to rewrite the script. No word on whether this is a complete rewrite or just a polish, but since the term “rewrite” was being bandied about, it’s a pretty sure thing that he’s doing more than “punching up the dialogue.” (The original version of the screenplay was written by Max Borenstein, known for The Seventh Son.)

Darabont is a great choice, because he’s an experienced script doctor and he knows his way around genre material. I loved his script for The Mist, but most people know him for penning two other Stephen King properties, The Green Mile and The Shawshank Redemption. Darabont knows all about adapting licensed material, so the big green guy is in good hands.

And more different hands. No one knows — well, no is telling — what happened, but Legendary Pictures has cut producers Dan Lin and Roy Lee out of the picture by exercising their pay-or-play contract clause, meaning they are being paid to walk away. Their names will be taken off the film and they will not share in any Godzilla revenue. Lin is a big cheese producer at Warner Bros, so one wonders if Legendary isn’t making some big enemies with this move.

The WordPress.com stats helper monkeys prepared a 2012 annual report for this blog.

19,000 people fit into the new Barclays Center to see Jay-Z perform. This blog was viewed about 100,000 times in 2012. If it were a concert at the Barclays Center, it would take about 5 sold-out performances for that many people to see it.