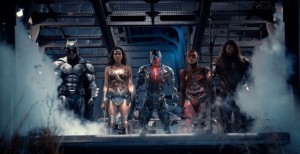 Warner Brother released this image to USA Today for its promotional package on “must-see” movies in 2017, and I must say, the gambit totally backfired: This doesn’t make me want to see Justice League. It makes me want to laugh and then feel sorry for DC Comics.

The photo depicts most of the Justice League, DC’s team of superheroes meant to compete on the silver screen with Marvel’s Avengers. Included here are Batman (Ben Affleck), Wonder Woman (Gal Gadot), Cyborg (Ray Fisher), the Flash (Ezra Miller) and Aquaman (Jason Momoa) — but the team’s final member, Superman (Henry Cavill), is nowhere to be seen.

That could be because Supes was killed in the abominable Batman v Superman: Dawn of Justice and producers are trying to keep his resurrection a scret. But I think he’s just hiding because he doesn’t want to be associated with another bloated, self-important turkey that collapses under its own weight.

“[Filming Justice League] was all about the filling-out of this massive comic-book pantheon with the biggest and coolest heroes we could,” director Zack Snyder told the newspaper.
END_OF_DOCUMENT_TOKEN_TO_BE_REPLACED 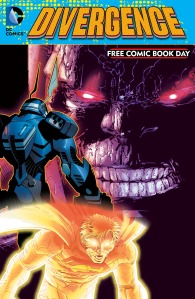 Available for free from participating comic stores, Divergence will boast three, eight-page previews for the company’s June releases: Batman by Scott Snyder and Greg Capullo; Justice League by Geoff Johns and Jason Fabok (featuring the Darkseid War of Darkseid vs. the Anti-Monitor); and Superman by Gene Luen Yang and John Romita Jr.

Now, in a mind-boggling move, Superman has been given back the silly T-shirt and jeans he was forced to wear when the failed  “New 52” started, and Wonder Woman has… well, it’s hard to tell what’s new with her latest get-up, since her look has been changing so much lately. Let’s just settle for saying it’s as bad as the first time they put pants on her.

Not as bad as Superman’s crappy duds, but still.

And let’s not even start on the Man of Steel’s haircut.
END_OF_DOCUMENT_TOKEN_TO_BE_REPLACED

Here is the first look at what Melissa Benoist will be wearing when she appears as the title character in CBS’ upcoming SUPERGIRL pilot. It’s clearly a version of the fighting togs worn by Henry Cavill in Man of Steel.

And I think that’s the point: DC Comics/Warner Bros want to establish a brand, and so they have to have a consistent look. If Supergirl’s uniform were all bright and cheery, that would conflict with the established grim-and-gritty feel of Superman’s look. Let’s just hope that Kara Zoe-El doesn’t go around casually breaking necks whenever it’s convenient,  like her cousin.
END_OF_DOCUMENT_TOKEN_TO_BE_REPLACED 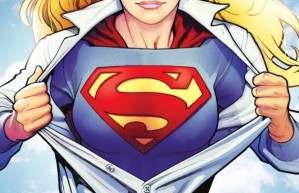 That planned CBS SUPERGIRL series is looking for someone for portray the title character’s cousin, Superman.

Technically, the show is looking for a Kal-El “body double,” so Superman might only be seen from a distance or in silhouette, as opposed to actually having lines.

According to ProjectCasting.com, the production is looking for someone “5-foot-11 or taller” and “square-jawed,” with “a ripped physique” be portray the double of a “DC Comic Superhero.” How mysterious! But then again, interested parties are told to respond via e-mail with “Superman” in the subject line.

Direct from the set of Batman v Superman: Dawn of Justice, Henry Cavill and Amy Adams (Superman and Lois Lane) take the ALS Ice Bucket Challenge. And, as befits a superhero, Cavill goes the extra mile:

The first glimpse of Henry Cavill back in costume as Superman for Batman v Superman: Dawn of Justice has come courtesy of newspaper USA Today.

There are no noticeable changes to the red-and-blue jammies, but to me Cavill’s hairline looks… odd. When I saw this, the first thought that leaped to mind was: “Don’t you think he looks tired?” (Am I right, Whovians?)
END_OF_DOCUMENT_TOKEN_TO_BE_REPLACED