It’s going to be an unseasonably chilly July if HBO and GAME OF THRONES has anything to say about it.

The second trailer for GoT kicks off with a serious-looking Sansa Stark in the snow with a voice-over from Lord Baelish counseling her to beware of enemies not just in the North or the South, but on all sides. And then lots of cool stuff. Check it out:

Among the coolest touches: seeing the Hound; Dothraki hordes vs. Lannister legions; dragons; crows; dragons; the Night’s King; more dragons; Tyrion; Arya with a sword; and Beric with a flaming sword!

In case you need a reminder of what was in the first trailer, watch it here.

Take a look at this reel, featuring various stars and behind-the-scenes crew of THE WALKING DEAD talking about their expectations for the sixth season…

THE WALKING DEAD kicks off its sixth season on AMC with a 90-minute special on Oct. 11 at 9 p.m. 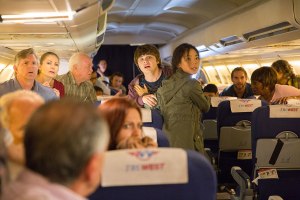 The season nine premiere of DOCTOR WHO drew 2 million total viewers to BBC America Saturday night, with double-digit growth in all the key demos, making it the network‘s biggest season premiere ever, according to AC Nielsen and the net itself.

“DOCTOR WHO is unlike anything else on television, a storied franchise that is as fresh and contemporary as ever, with brilliant writing and superb performances. We couldn’t be more thrilled that new and returning DOCTOR WHO fans tuned into the live premiere in record numbers and we look forward to bringing more of the Doctor to this passionate audience.”

END_OF_DOCUMENT_TOKEN_TO_BE_REPLACED

Series nine of DOCTOR WHO — the second for Peter Capaldi as the 12th Doctor and the last for Jenna Coleman as Clara — returns tonight with the first installment of a two-parter, “The Magician’s Apprentice.”

This is the official episode synopsis:

“Where is the Doctor? When the skies of Earth are frozen by a mysterious alien force, Clara needs her friend. But where is the Doctor, and what is he hiding from? As past deeds come back to haunt him, old enemies will come face-to-face, and for the Doctor and Clara, survival seems impossible.”

“The Magician’s Apprentice” airs tonight at 9 on BBC America.

“The Magician’s Apprentice,” the debut episode of the ninth season of the revived DOCTOR WHO, and the second starring Peter Capaldi as the 12th Doctor, premieres tonight at 9 o’clock on BBC America.

If you’re not already practically vibrating while waiting for the show to start, here are some intriguing photos to get you in the spirit. 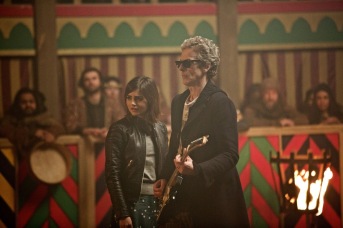 These images remind of the Seventh Doctor (Sylvester McCoy) performing for the Gods of Ragnarok in season 24’s “The Greatest Show in the Galaxy,” don’t you think?

If you’re not foaming at the mouth for the debut now, I can’t do any more for you…

Today is the day! It’s the first day of the Underwood Administration.

And, just in case you’re not entirely caught up on seasons one and two, check out this remarkable video from the Fine Bros. 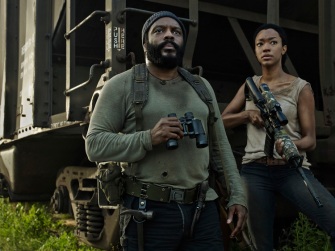 Believe it or not, the return of THE WALKING DEAD is not that far off — season five premieres on Oct. 12. 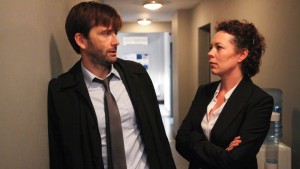 I quite enjoyed last night’s premiere of BROADCHURCH on BBC America, but I definitely didn’t see anything that was very “new” or “groundbreaking” — which is the way the series is being sold. BROADCHURCH is a police procedural about the murder of an 11-year-old boy in a British seaside town, and how the killing affects everyone in town.

Perhaps its storytelling is new for a series in the UK, but BROADCHURCH reminded me instantly of TWIN PEAKS, but without the supernatural elements: the death of a child shakes a small town to its core. I expect future installments to reveal the dead boy Danny was involved in a secret conspiracy that affects a lot of adults in town and reaches into the local school — just like Laura Palmer’s situation.  It’s even mimicking the law-enforcement dynamic: the local cop who knows everyone in town teamed with the eccentric “expert” from somewhere else.
END_OF_DOCUMENT_TOKEN_TO_BE_REPLACED