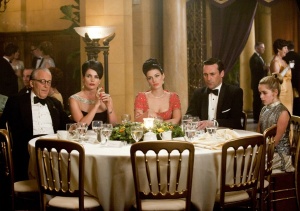 The Draper women edged into the spotlight a little more this week. This is nothing new for Megan, who has been a lodestone for storylines this season as MAD MEN explores Don’s new marriage. But Sally is also continuing her growth as a character. You will recall several… er, strange incidents last season; I’m expecting a payoff on that material this season.

Apparently as bored by the Heinz beans account as the viewing audience, Megan (Jessica Paré) came up with a brilliant campaign — mothers serving beans since the dawn of time and on into the future! — which Don (Jon Hamm) loved. That night, at a casual dinner with Heinz honcho Raymond, his wife let slip to Megan that Sterling Cooper Draper Price were being fired. Megan passed the news to Don in a whisper and set him up to deliver the beans pitch on the spot — “Heinz beans: Some things never change” — which he did with all the charm of first-season Don. Raymond was instantly sold and the account was saved!

Megan was less successful on the home front, when her snooty French-Canadian parents, Emile (Ronald Guttman) and the younger Marie (Julia Ormand) visited. He’s a frustrated Marxist academic and she’s bored. So bored, in fact, that she immediately made eyes at Don while carping about Emile’s infidelities. They had a tendency to argue in French, which made Don feel left out. Meanwhile, Sally (Kiernan Shipka) and Bobby (Mason Vale Cotton) had to stay with Don after Grandma Pauline (Pamela Dunlap) broke her ankle, so that apartment was mighty crowded.

Don was set to receive an award from the American Cancer Society for that big ad he placed last season that SCDP would no longer take tobacco accounts. The Don, Megan, Sally, Emile and Marie were on hand at the gala, as was Roger (John Slattery) — who declared little Sally his date, and started teaching her how to work a room. Simultaneously, Marie was setting her sights on Roger. While Don was receiving his award, Marie and Roger disappeared. Sally went looking for the restroom and walked in on Roger and Marie… er, putting their heads together! Shocked, Sally slipped out unseen. 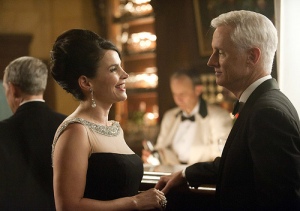 And Don was in for a shock of his own, courtesy of Ken’s drunken father-in-law, Ed (Ray Wise).  No, not that Ed has an alternate personality with a thing for blondes and plastic sheeting — rather, that all the businessmen assembled to laud Don absolutely love his work, but hate him! No one will hire him after he “bit the hand.”

Always looking for a way to tear herself down, Peggy (Elisabeth Moss) assumed that Abe’s (Charlie Hofheimer) strange behavior and invitation to a fancy dinner meant he was about to break up with her. Joan (Christina Hendricks) said it’s more likely he’s about to propose, and sent Peggy shopping. She showed up at the restaurant all dolled up and Abe popped a question: Will you move in with me? Peggy was crestfallen, but agreed. She invited her mother over for dinner to give her the news, and of course mom was furious. She even wanted to take back the cake she brought so Peggy and Abe couldn’t eat it to celebrate living in sin!

So what did we have this week? Peggy’s disapproving mother and Megan’s dysfunctional parents. Don being superdad. A father-in-law as the bearer of bad news. Roger as a surrogate father figure for Sally. I guess parents say the darnedest things.

There was a big mystery hidden in the Megan storyline, sandwiched among all the bluster between father and daughter: Emile is angry at Megan for giving up on her dream and “settling” for Don and a career in advertising. What did he mean by that?  Surely he wasn’t referring to her abandoned acting career. What father wants his daughter to become an actress? Given his Marxist leanings, perhaps he was furious that she was undertaking a life of consumerism and capitalism instead of some childhood fever dream about revolution and the proletariat. 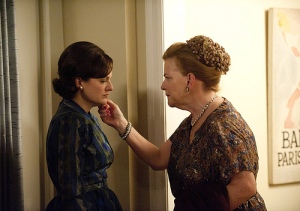 Thing is, Megan seems to have a talent for advertising — even Don is noticing, which is significant following the Code Orange meltdown at Howard Johnson’s when she couldn’t pick up on his clues to switch from wife to co-worker mode and back. The key may be to let her focus on just one area at a time.

And what about that other Draper female? Sally had a chance to see her father lauded in front of titans of industry, but she also saw Roger taken down a peg or two in her mind. After witnessing Roger and Marie in flagrante delicto, she called Glen at boarding school and told him that Manhattan is “dirty.” Sounds like narrow-minded tyrant Grandma Pauline is having quite an effect on the girl.