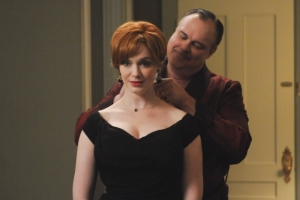 Why is a Jaguar like a woman — specifically, like a mistress? That was the big question torturing the boys at Sterling Cooper Draper Pryce as they contended with problems stemming from the real women in their lives: Joan, Peggy and Megan. The guys knew that the Jaguar was pretty yet impractical — like a mistress — but how could they sell that idea?

With the offices of SCDP buzzing with preparations for the big Jaguar pitch, Herb (Gary Basaraba), the head of Jaguar’s auto dealers’ association, told Pete (Vincent Kartheiser) and Ken (Aaron Stanton) his one non-negotiable demand to win SCDP a yes vote from him: spending a night with Joan Harris (Christina Hendricks). And she won’t be taking dictation, if ya know what he means! Of course they do, and while is Ken is grossed out; Pete sees this as just another negotiation.
END_OF_DOCUMENT_TOKEN_TO_BE_REPLACED