After weeks of almost-cruel teasing, Lionsgate has finally confirmed the casting of Jena Malone as Johanna Mason in The Hunger Games: Catching Fire — as well as the two movies adapting Mockingjay. And I could not be happier! I love Jena and think she will be a hit with fans of the books.

Johanna, the Tribute with “a wicked ability to murder,” is a fan-favorite character, and the hiring of Jena, a serious actress with top-shelf fighting skills, sends a strong message about the filmmakers’ intentions to do right by the book and the fans. Jena is perfect for the role — when I was reading Catching Fire, I was personally imaging either Jena or Emily Browning in the role. Jena can convey both the vulnerability and the savagery that Johanna used to manipulate and then kill her fellow tributes and win her Games.

For a little taste of the kind of action chops Jena is bringing to Johanna, check out this short clip of Jena as Rocket from Sucker Punch:

Did you notice that little smile before Rocket stalked down the trench, and then how she wielded her pistol like a hatchet?

Johanna is one of the strongest female characters in the books aside from Katniss, and plays a major part in the Catching Fire novel. Obviously she is a born strategist (based on her clever plan to win her Games), but she also takes risks, such as being openly hostile toward the Capitol. She’s a complex character, and with the right script Jena will get a chance to do a lot of emoting. The press announcement from Lionsgate describes the character thusly:

“Johanna Mason, a female victor from a past Games still in her early twenties, is one of the youngest, but also one of the most psychologically scarred Quarter Quell participants.”

I’m not sure I agree the assessment that Johanna is the most messed-up the Victors. What about Finnick? And Wiress? 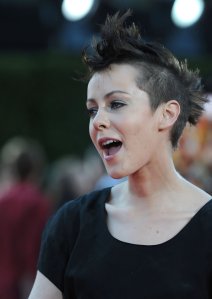 Jena is comfortable with short, spiky hair, like Johanna’s ‘do.

Speaking of Finnick Odair, that is the last major role still uncast. And, just like Johanna, there has been a tremendous number of names said to be circling the part. (Veronica Mars herself, Kristen Bell, was openly lobbying for Johanna.) The latest name tied to the trident-wielding District 4 Victor is Sam Claflin. You may remember him for being totally forgettable as the missionary in Pirates of the Caribbean: On Stranger Tides, or as… somebody (a prince?) in this spring’s Snow White and the Huntsman. He would be a particularly weak choice, which seems to go against the trend for this movie – from Oscar winner Philip Seymour Hoffman to prettyboy Sam Claflin?

Here is the studio’s official synopsis of THG:CF

“The Hunger Games: Catching Fire begins as Katniss Everdeen has returned home safe after winning the 74th Annual Hunger Games along with fellow tribute Peeta Mellark. Winning means that they must turn around and leave their family and close friends, embarking on a “Victor’s Tour” of the districts. Along the way, Katniss senses that a rebellion is simmering, but the Capitol is still very much in control as President Snow prepares the 75th Annual Hunger Games (The Quarter Quell) – a competition that could change Panem forever.”