Some of you readers may have figured out by now that I am a big fan of Emily Browning, a talented young actress who has been getting back into the swing of the industry of virtually retiring following Lemony Snicket’s A Series of Unfortunate Events. Since Sucker Punch, she has appeared in last year’s controversial Sleeping Beauty, and now she is filming God Help the Girl. 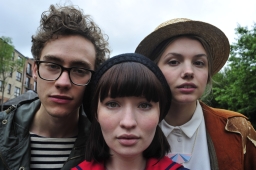 The film is about a girl called Eve (Browning) who is hospitalized for emotional problems and turns to songwriting to deal with her demons. Her work leads her to Glasgow, Scotland, where she meets James (Olly Alexander) and Cass (Hannah Murray), musicians facing crises of their own. Directed by Stuart Murdoch of the Scottish indie band Belle & Sebastian the movie grew out of a series of songs he wrote in 2003 that felt more appropriate for a girl group to sing. The songs were released on the 2009 album God Help the Girl.

Until the project is released, you can keep track at the official God Help the Girl site.