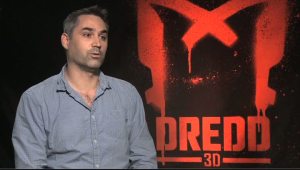 Well, probably hell will have frozen over by then, considering that Dredd 3D was sadly DOA at the American box office. But if — IF — screenwriter Alex Garland got the go-ahead for a sequel, where would he take the film series?

Back to the comics, of course!

“It would be about origins and subversion, and Chopper would feature. In fact, I think Chopper would start and end the story. Apart from him, my rough plan involves Fargo, Giant, Angel Gang, and a version of Satanus. For a trilogy, add Cal and the Dark Judges. And Anderson would be in all three. But… just to be clear, this is hugely speculative and also unlikely, for any number of reasons. [I would] not play [the Dark Judges] for laughs… just make them totally malevolent and lethal… use practical effects where possible.”

It’s a damn shame that American audiences didn’t turn out in droves for this smart, fun film, because it seems like everyone who saw it, really enjoyed it (me included).