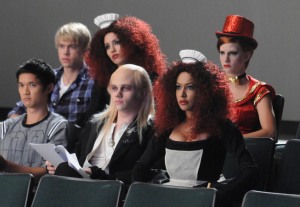 The-powers-that-be at GLEE made the interesting decision to tackle the classic midnight movie/interactive stage production The Rocky Horror Picture Show by adapting it into “The Rocky Horror Glee Show,” leading to spasms of pearl-clutching and hyperventilation by self-appointed minders of so-called public morals. It would appear they got their money’s worth, as swathes of the work were excised and adapted.

On its surface, RHPS would appear to be the perfect production for the McKinley High show choir to tackle. As Will (Matthew Morrison) pointed out, the RHPS cultural phenomenon was spawned among the outcasts at the fringe of society, who bonded over their mutual affection for the crackpot musical. And, as has been repeatedly drummed into viewers’ heads, the glee club draws from the social dregs of the high school. But then again, GLEE itself airs on a major broadcast network at 8 p.m., not darkened movie theaters in a shabby part of town in the middle of the night. And thus, certain concessions must be made. 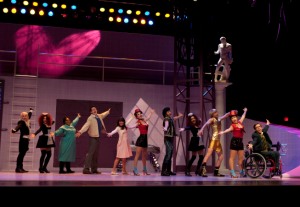 The biggest issue for me was the apparent randomness of the alterations, especially when considered in light of what has previously aired on the show. In recent weeks, GLEE aired that sexy Britney Spears tribute episode and tackled the volatile issue of faith. And, after talking about it since last season, Brittany (Heather Morris) and Santana (Naya Rivera) were depicted lying on top of each other, making out. In that light, did it make sense to alter the lyrics of “Touch-A, Touch-A, Touch Me” from “heavy petting” to the nonsense phrase “heavy sweating”?

Apparently, the idea of John Stamos (Carl) decked out in fishnets and garters as Dr. Frank-N-Furter was too much for the network – which had no intention of letting one of the purported high-school boys (portrayed, it must be remembered by men in their mid-20s) get kitted out in drag, either. (Hence Curt’s [Chris Colfer] reluctance to play into stereotype.) So the role of the “sweet transvestite from transsexual Transylvania” went to Mercedes (Amber Riley). Now I am all for colorblind casting and hiring the best actor for any role, but casting a female as Frank-N-Furter, rendered the character completely pointless. “He’s” no longer a transvestite. And what was up with changing the lyrics of “Sweet Transvestite”? Amber sang that Frank-N-Furter was “a sweet transvestite from sin-sational Transylvania.” So it was okay to sing “transvestite” but not “transsexual”? The character was demonstrably not a transvestite, but lyric remained. Apparently it’s okay to dress the part, so to speak, but not…er, fully commit to it?

Another interesting facet of the episode was the emphasis on body-image issues among the guys. Finn (Cory Monteith) was shown to be so completely ashamed that he refused to even take off his shirt, let alone strip to his tighty-whiteys to play Brad. Quinn (Dianna Agron) and Santana remarked about how boys objectify them. And Sam (Chord Overstreet) demonstrated signs of developing an eating disorder: He told Finn that he felt like he had “rolls of fat” hanging over his gold-lame shorts when he was playing Rocky. Classic behavior. He them lifted his shirt, revealing rock-hard abs, and sighed, “Damn you, Cool-Ranch flavor Doritos.”

But the show also sent if not mixed messages, then at least balancing messages. While obsessing about himself, Sam was supportive of Finn. He told the quarterback, “Be you, and the sexy will come through.” (Although clearly, he did not intend for Finn to stroll the halls in his boxers!) And Mercedes crowed about how sexy she would look decked out in full Frank-N-Furter regalia; clearly she learned something from last season’s stint with the Cheerios.

So what did we learn from this week’s episode of GLEE? Well, we learned that network suits are pretty arbitrary when it comes to…uh, “editing” content. Would the world have ended if Frank-N-Furter was still from “transsexual Transylvania”? No, it would not. With audiences dwindling at an alarming rate, the nets seem more eager than ever to run up to edge of controversy and stare it in the face. (Heck, putting GLEE on the air at all was a brave move by Fox!) But, faced with threats from special-interests, apparently all too willing to blink.