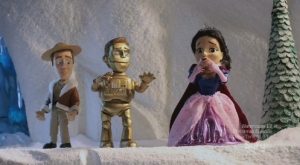 They say there are only two certainties in life: death and taxes. But there is a third — every episode of EUREKA will about some crazy invention/science experiment going out of control and wreaking wacky havoc that can only be fixed by technobabble and Sheriff Jack Carter’s down-to-Earth common sense. That’s not necessarily a bad thing, since the show usually pretty entertaining, but I’m just saying — it’s a pretty rigid template.

That formula is no different around the holidays. Since the motto of Eureka township must be “Better Living Through Science (or, at least, that what we intend),” Carter (Colin Ferguson) concocts a plan to turn the town into a winter wonderland using a super proton generator to manufacture snow. Of course, things don’t go exactly as planned.

When young Jenna can’t sleep at the smarthouse, big brother Eric (Trevor Jackson) and Zoe (Jordan Hinson) — who’s visiting from college — try to read her a bedtime story from her new interactive holograph book.  A power surge at Global Dynamics sends the super proton generator out of control, and the energy wave sweeps over the town, interacting with Jenna’s holobook to bring the bedtime story to life — animated life, that is. The town is transformed into a cartoon wonderland. Then follows the usual struggle to shut down the overloaded tech before the world is destroyed or reality breached — or, in this case, perhaps before Judge Doom shows up with a big barrel of Dip.

The meat of the episode follows Carter, Allison (Salli Richardson-Whitfield), Andy (Kavan Smith), Jo (Erica Cerra), Henry (Joe Morton) and Fargo (Neil Grayston) as they try to pull the plug on whatever turned them into cartoons.  Not content to merely do an animated episode, EUREKA mixed live-action scenes with animation — and used several different art styles, encompassing a primitive Hanna-Barbera pastiche, adorable stop-motion and finally sleek anime. The regular cast voiced their animated characters, which were all instantly recognizable, no matter what the style.

Allow me to indulge in a bit of a rant: When I saw the Hanna-Barbera-inspired segment, my heart sank, because I blame HN for ghettoizing cartoons in the United States by saturating TV in the 1960s-‘70s with its cheapskate limited-animation house style and idiotic storylines.  The HB hack factory is, in my opinion, responsible for destroying the witty, noble animated genre that starred Bugs Bunny and other magnificent Looney Tunes and replacing it with primitive, cheap garbage that poisoned the minds of generations. It’s still going to take at least another decade of strong material to undo the damage that William Hanna and Joseph Barbera did to the art form.

Ahem. But I digress…

Perhaps as compensation to animation aficionados such as myself, the powers-that-be included a segment in which the animation style changes rapidly, giving shout-outs to Peanuts, The Simpsons, South Park and… er, Scooby-Doo. (And, thus, back to HB…) Also, switching to anime for the climatic battle sequence demonstrated that TPTB really thought about which drawing style would be best for certain scenes.

The big obstacle the gang has to overcome is what Carter calls “sninjas”  — ninja snowmen that are tough to kill because they’re made of snow. The encounters are fun, with the stop-motion version of the giant sninja being my favorite. (Love those icicle teeth!), but of course any battle to the death should be done in anime — especially a showdown that involves a big explosion!

I also loved the dialogue delivery by Ferguson and Smith during the gag when Jo asks if Carter and Andy peeking up her princess dress. Speaking of the GD security chief, how did she end up in a Disneyesque “Jo White” costume? Henry as a pull-string toy was hilarious, and Fargo actually seemed to enjoy becoming a bobblehead doll — when he wasn’t running afoul of force-fields, that is.  The claymation polar bear reminded me of the Bumble from Rudolph the Red-Nosed Reindeer. And portraying Taggart (Matt Frewer) as a polar bear who assures Jo its okay to be girly and have feelings every now in then was a riot! So was using a talking sled dog to deliver the show’s other “teachable moment,” when Rudy tells Andy that it’s okay to be different from everyone else. That was followed later by heartwarming Christmas morning scene, in which everyone visits the smarthouse to exchange presents and season’s greetings. Awww!

What saved the special episode from overdosing on seasonal schmaltz was a hefty helping of whimsy and winking self-awareness of how silly things could get — but didn’t. In a way, using animation disarmed the ridiculousness of the premise. But it also gave a warm sense of nostalgia to folks like me, who grew up on Rankin Bass’ claymation holiday specials. I just wish they could have done a scene in Rankin Bass’ signature 2D style, a la Frosty the Snowman. Or maybe Chuck Jones’ How the Grinch Stole Christmas! But don’t always get what we want for Christmas…