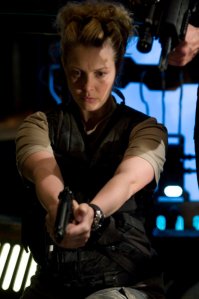 So what (or who), exactly, was “awakening” in this week’s episode of STARGATE UNIVERSE? The new aliens? The seedship? Rush? Young? Telford? How about “all of the above.”

Picking up from last week’s cliff-hanger, we discovered that the mystery “object” was another ship – one that looked almost exactly like Destiny. The ship was clearly of Ancient design; it was one of the many craft sent out ahead of Destiny to seed worlds with stargates. Brody (Peter Kelamis) theorized that it had suffered some kind of breakdown, enabling Destiny to catch up. The sister ships docked, and Brody, Volker (Patrick Gilmore), Scott (Brian J. Smith) and Greer (Jamil Walker Smith) entered the other ship with a kino to explore. Meanwhile, the ships automatically began transferring data.
END_OF_DOCUMENT_TOKEN_TO_BE_REPLACED 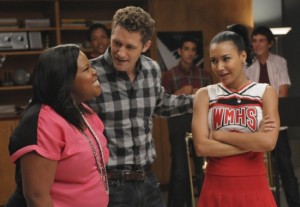 GLEE, I have to say it: I enjoyed your “Duets” episode at least twice as much as last week’s “Grilled Cheesus” show about faith, or even the previous week’s Britney Spears spectacular. The premise was simple: Everyone pairs off to perform duets. What was complicated was who paired with whom, and why. The prize was a dinner for two at Breadstix, and from the way the kids went crazy, one might assume Wolfgang Puck – or at least Gordon Ramsey – had take over the kitchen.

“Great duets are like a marriage,” Will (Matthew Morrison) suggested, and in this case, it made for some strange bedfellows. I mean, Artie (Kevin McHale) and…Brittany (Heather Morris)? Santana (Naya Rivera) and…Mercedes (Amber Riley)? Quinn (Dianna Agron) and…Sam (Chord Overstreet)? And what happened to Mark Salling that necessitated sending Puck to juvie? Perhaps it was just a stunt to get Sam into the glee club?
END_OF_DOCUMENT_TOKEN_TO_BE_REPLACED