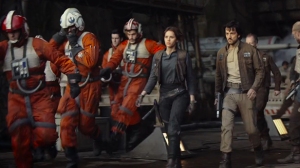 The next entry in the Star Wars universe, Rogue One: A Star Wars Story, represents Disney taking a big chance with the first-ever stand-alone movie, meaning it is not connected to the Skywalker family in any way, so it’s not surprising that the studio is nervous about tampering success in the wake of Star Wars: Episode VII — The Force Awakens. But absolute panic has swept fandom since the announcement that Rogue One will be doing reshoots this summer.

Calm down, people! Reshoots are perfectly normal — even expected in modern filmmaking. Sure, there used to be a time when doing reshoots meant a movie was in trouble and the studio was desperate to fix it, but that is no longer the case.

Producers now plan to do reshoots, scheduling time to make adjustments based on input from test screenings or studio suggestions. Such is the case with Rogue One. Director Gareth Edwards (Godzilla) knew he was going to be doing more filming this summer, this is not a shock.

The Hollywood Reporter looked into what the reshoots are hoping to accomplish and a source said:

“This is the closest thing to a prequel ever. This takes place just before A New Hope and leads up to the 10 minutes before that classic film begins. You have to match the tone!”

Rogue One hits theaters on Dec. 16.

One thought on “‘Rogue One’ Doing Reshoots? Everybody Calm Down!”