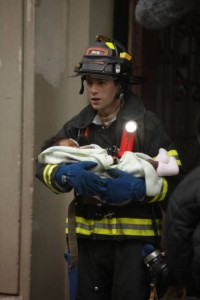 Following last week’s night of passion with Janet (Andrea Roth), Tommy (Denis Leary) woke up early and burned some eggs. But what really bothered me was him wearing a Boston Bruins shirt – that’s just something no true New Yorker would be caught dead wearing! Tommy should have been wearing a N.Y. Rangers sweater, but this is a case of Massachusetts-born co-creator Leary throwing his weight around and allowing his own sensibilities to compromise the character. Something else that seemed out of character at first blush? Tommy actually wanted to talk about last night! But of course Janet didn’t. Then Tommy forced the issue. She admitted that she was assuming this meant they were starting over, all “happy, happy sunshine.” He confessed that the sex just happened, but maybe it was the beginning a “recom…commitment…thing.” Surprisingly, she was willing to give it one more shot. (Apparently the memories of the late Connor that were conjured last week were damn powerful.) But this was The Last Time. If it crashes and burns, or if it’s just another one of his empty promises, it will be the last hurtful thing he ever does to her. Janet’s one caveat: zero contact with Sheila. She called him turning to Sheila an emotional betrayal, like a dagger to her heart.
END_OF_DOCUMENT_TOKEN_TO_BE_REPLACED 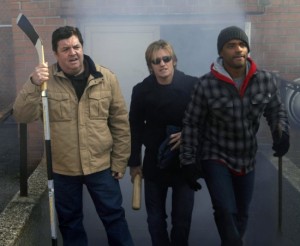 RESCUE ME began with the aftermath of Tommy’s desperate bid to save the life of one child, and ended with the long-delayed fallout of the loss of another child.

Tommy (Denis Leary) was in jail following his booze baptism of daughter Colleen (Natalie Distler) last week. While locked in stir, he apologized to the ghost of Connor, whom he had previously roughed up (alongside Jimmy’s shade). Janet (Andrea Roth) eventually sprung him and took him home. When Colleen suggested that her father’s extreme aversion therapy may have actually made her lose her taste for alcohol, Tommy insisted on testing it by forcing her to take a drink. She promptly puked. That wasn’t enough for him, so he made her down another shot; she got sick again. Hammering home the point, Col wanted to try a swig of wine, but just looking at the bottle in the fridge made her toss her cookies. Janet realized his homemade “tough love” may have saved Colleen, and Janet agreed to go to dinner with him.
END_OF_DOCUMENT_TOKEN_TO_BE_REPLACED

This week’s RESCUE ME offered three knock-down fights the likes of which you probably have never seen before: a drunken brawl at an AA meeting; two firemen tangling in an alley; and a father forcibly baptizing his daughter in the waters of their mutual addiction.

After the horrifying bender that very nearly resulted in his daughter’s death, and then seeing a reckless drunken woman kill her daughter in a car wreck and walk away, Tommy (Denis Leary) decided he needed take drastic action to get his daughter Colleen (Natalie Distler) off the sauce before he loses another child. The problem, however, as Janet (Andrea Roth) observed: “She’s young, dumb, and a Gavin.”
END_OF_DOCUMENT_TOKEN_TO_BE_REPLACED 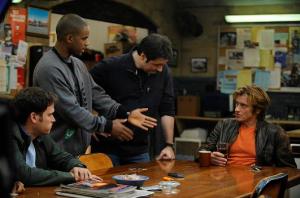 This week’s wrenching RESCUE ME took a look at the ramifications of being a blackout drunk like Tommy; it’s not all good times, sex and heroic rescues. Sometimes it’s fights and loss of memory and family members.

When last we saw Tommy (Denis Leary) he was embarking on a bender with the top-shelf whiskey that Mickey (Robert John Burke) and Uncle Teddy (Lenny Clarke) had given him. Locked in the back room of the bar, he instantly spiraled out of control in a way we have never seen before. Sure, we’ve seen Tommy desperately try to drown his sorrows in the past, and we’ve seen some pretty crazy hallucinations – up to and including Jesus – but we have never seen him this out of control before. When Jimmy’s shade showed up to chide him for drinking and pissing his life away, Tommy turned on him and actually beat the snot out of him! Tommy claimed that he had carried Jimmy all those years, and the one time he took his eyes off him – 9/11 – Jimmy got himself martyred and became an instant hero, leaving Tommy to feel like the goat. Tommy was interrupted by the specter of his son Connor – and Tommy even lashed out at him! This is when we knew Tommy had totally lost it. No way a sober Tommy roughs up his dead kid.
END_OF_DOCUMENT_TOKEN_TO_BE_REPLACED

This week’s RESCUE ME ended on shock image: Lou was found collapsed on the floor of the station, eyes open, apparently dead. That’s one hell of a cliff-hanger! But then, moments later, the previews for next week’s installment ruined the whole frakkin’ thing by showing Lou alive, and just as combative as ever! Spoilers, FX… spoilers!

Okay, okay, so I didn’t really think Lou was going to die; but how about making the effort to sell the illusion? That’s what episodic storytelling is all about: trying to get the audience to invest in a given week’s story when we all know that the status quo will be restored by the end of the story. So maybe FX was giving us viewers credit for being savvy enough to know John Scurti isn’t going anywhere, and so the network decided to wink at us through the promos. Yeah, that’ it! Way to get all meta on us, FX. In a way, that makes the network hip, doesn’t it? (Personal aside: um, no… no, it does not.)
END_OF_DOCUMENT_TOKEN_TO_BE_REPLACED

Stop me if you’ve heard this one before: RESCUE ME’s Tommy Gavin is gonna stop drinking. This time for real. Why are you laughing? Oh, right, this is Tommy Gavin we’re talking about. How many times have we heard those exact same words? And we viewers have only known Tommy for a few years. Imagine how often his friends and family have heard that one!

Yep, this week’s RESCUE ME represented yet another attempt by Tommy (Denis Leary) to climb aboard the wagon and stay on it for more than a few weeks. “I’m living in the moment,” he told Mickey (Robert John Burke). “I’m making some positive changes.” Unsurprisingly, his announcement was met with peals of laughter by his firehouse buddies. But Tommy was (mostly) sincere with his “making amends stimulus package”; after all, he did have a gun pointed at his head. Last week, Uncle Teddy (Lenny Clarke) promised to finish the job he started last season if Tommy strays off the straight-and-narrow. Problem is, nobody else believes Tommy is capable of quitting, and by the end of the episode, everybody was proved right.
END_OF_DOCUMENT_TOKEN_TO_BE_REPLACED