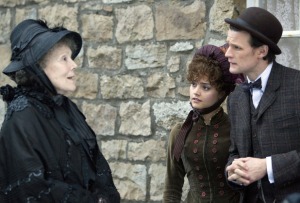 It was only a matter of time until Madame Vastra, Jenny and Strax made another appearance on DOCTOR WHO and, given their tie-in to the mystery of Clara from Christmas, that time was going to come sooner rather than later.

Yorkshire, 1893. Madame Vastra (Neve McIntosh), Jenny (Catrin Stewart) and Strax (Dan Starkey) investigate when the latest victim of “the Crimson Horror” is discovered to have an image of the Doctor (Matt Smith) burned into his retina. The trail leads to Sweetville, a Utopian society operated by Mrs. Gillyflower (Diana Rigg), which accepts only exemplars of the human form. Jenny infiltrates the society and discovers the Doctor chained in a secret room, his skin turned crimson and waxy, just like the deceased victims of the Crimson Horror.
END_OF_DOCUMENT_TOKEN_TO_BE_REPLACED