When the Doctor… er, “loaned” his sonic screwdriver to Davros in “The Magician’s Apprentice,” he relieved himself of his trademark instrument — and that had to be replaced. Enter: the sonic sunglasses, a hopped-up, high-tech version of Ray-Ban Wayfarers.

Fan reaction was predictable: This was the end of the world! Showrunner Steven Moffat — frequent target of fan venom for shaking up the status quo — sent more people running for the hills than the Untempered Schism ever did.

“As of now, every kid with glasses is Doctor Who! Kids whose parents don’t want to shell out for a sonic screwdriver toy — just put on a pair of sunglasses, you’re Doctor Who! And best of all, every pin-brained celebrity walking into a party with shades on is now cosplaying Doctor Who! If it pricks the pomposity of ubercelebs and turns an eye defect into a super power and confers star-magic on an old pair of sunglasses — what could be more Doctor Who than that?”

END_OF_DOCUMENT_TOKEN_TO_BE_REPLACED 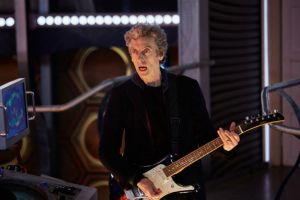 Exterminating nasty rumors that have been running rampant among the British tabloids, DOCTOR WHO executive producer and lead writer Steven Moffat confirmed today that the next season of DOCTOR WHO — the 10th since its revival — will consist of a full slate of 12 episodes plus a Christmas special.

And the whole season will star Peter Capaldi!

“We’re making a full series. I can confirm that. I’m making a full series of 12 episodes, plus a Christmas special. I don’t know when it goes out. That’s up to someone else. And even if I did know – which I genuinely don’t – I wouldn’t be allowed to say so as I have absolutely no say in it whatsoever.
It’s not being reduced in size. We’re not making fewer episodes. That’s all complete bunk. I can confirm that absolutely.”

END_OF_DOCUMENT_TOKEN_TO_BE_REPLACED 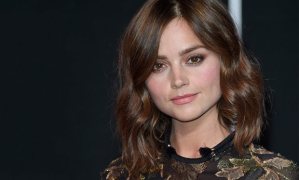 Things were looking grim for DOCTOR WHO’s Clara Oswald (Jenna Coleman) at the cliff-hanger ending of “The Zygon Invasion” this weekend, and no matter if the Doctor (Peter Capaldi) can rescue her this time, we fans know the Impossible Girl is not long for the Whoniverse.

It’s just a question of when, not if.

And, of course, how Clara will go.

Executive producer Steven Moffat told the audience at the recent MCM Comic-Con in London: “Jenna actually asked me, ‘could you just not have the new one come in while I’m still there?’”

Remember that Coleman’s initial appearance came as a total shock — playing Soufflé Girl in “Aslyum of the Daleks” — many months before she was expected to debut in the Christmas special.
END_OF_DOCUMENT_TOKEN_TO_BE_REPLACED

This week is the big “worlds collide” event, when Maisie Williams — Arya on GAME OF THRONES — guests on DOCTOR WHO as a mysterious new character, Ashildr, so naturally the BBC wants to drum up some interest. Thus we have this sneak peak at the opening of tonight’s episode, featuring the Doctor (Peter Capaldi) trying to find the time to save Clara (Jenna Coleman) from any number of gruesome fates including a “love sprite”!

“The Girl Who Died” is the first installment of a two-parter, so brace yourself for another stunning cliff-hanger ending, beginning at 9 o’clock on BBC America.

Peter Capaldi (the Doctor) and Jenna Coleman (Clara) try to get you psyched for tomorrow night’s new episode of DOCTOR WHO, “The Girl Who Died.” (Yes, this is the one with Maisie Williams from GAME OF THRONES)

Is Clara, The Impossible Girl, also the Girl Who Died? Jenna is leaving the show sometime during this series…

DOCTOR WHO is on BBC America tomorrow night at 9 o’clock.

The third episode of season nine of DOCTOR WHO premieres tonight with “Under the Lake,” the first installment of another two-parter…

Look for “Before the Flood” next week at 9 p.m. on BBC America.

The second installment of DOCTOR WHO season nine is called “The Witch’s Familiar,” and it picks up where “The Magician’s Apprentice” left off.

Here is a gallery of newly released pics. Some people apparently consider some of them spoiler, although I don’t see anything new here. However, if you’re totally spoiler phobic, then, I guess…. SPOILERS! 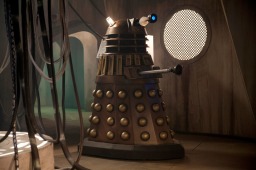 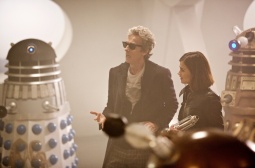 The season nine premiere of DOCTOR WHO drew 2 million total viewers to BBC America Saturday night, with double-digit growth in all the key demos, making it the network‘s biggest season premiere ever, according to AC Nielsen and the net itself.

“DOCTOR WHO is unlike anything else on television, a storied franchise that is as fresh and contemporary as ever, with brilliant writing and superb performances. We couldn’t be more thrilled that new and returning DOCTOR WHO fans tuned into the live premiere in record numbers and we look forward to bringing more of the Doctor to this passionate audience.”

END_OF_DOCUMENT_TOKEN_TO_BE_REPLACED

When the Zygons return — and they will, later this season, in a two-parter penned by Peter Harness — the story will be a sequel to their last appearance, in the 50th anniversary special, “The Day of the Doctor.”

Peter Capadi shared some teasers about his Doctor’s first run-in with the shape-changers:

“This one’s quite dark. One of the things the show hasn’t done in its current invention is to reflect current events very much but I think this one does. It’s a good thing. You’ll see some fundamentalist arguments – it’s very interesting to play with that.

“We had a great scene: We chased a Zygon around a supermarket. He hid among the pizzas. This is what we do, this how we roll — we get Zygons into a supermarket and chase them.”

END_OF_DOCUMENT_TOKEN_TO_BE_REPLACED

Series nine of DOCTOR WHO — the second for Peter Capaldi as the 12th Doctor and the last for Jenna Coleman as Clara — returns tonight with the first installment of a two-parter, “The Magician’s Apprentice.”

This is the official episode synopsis:

“Where is the Doctor? When the skies of Earth are frozen by a mysterious alien force, Clara needs her friend. But where is the Doctor, and what is he hiding from? As past deeds come back to haunt him, old enemies will come face-to-face, and for the Doctor and Clara, survival seems impossible.”

“The Magician’s Apprentice” airs tonight at 9 on BBC America.