The reimagined sequel to that reimagined superhero flick The Amazing Spider-Man has added another (potential) villain to the roster: Chris Cooper has signed to play industrialist Norman Osbourn, the man who eventually became the homicidal Green Goblin in the comic books and in Sam Raimi‘s trilogy.

The big question is if we’ll see the Goblin, or just Osbourn. After all, this sequel is already squeezing in a couple of major Spider-Man foes: Electro — played by Oscar winner Jamie Foxx, and the Rhino, played by Oscar nominee Paul Giamatti. It there room for a third baddie, played by a third Academy Award heavyweight (Cooper won in 2002)?

Let’s hope that returning director Marc Webb has learned some lessons from previous superhero sequels that got bogged down with more and more and more villains, eventually practically squeezing the hero out of his own movie — and all too often losing his dignity.

With director Marc Webb and stars Andrew Garfield and Emma Stone signed, sealed and delivered for a sequel to this summer’s The Amazing Spider-Man, it’s time to start speculating about the working-titled Amazing Spider-Man 2.

While people wonder which members of the rogues’ gallery Spidey should battle next, the filmmakers are concentrating on complicating Peter Parker’s personal life first. The Hollywood Reporter says Shailene Woodley (breakout star of The Descendants) has secured the role of red-haired temptress Mary Jane Watson, who was the primary love interest in the three Spider-Man movies starring Tobey Maguire, in which Kirsten Dunst played M.J.

The addition of Mary Jane sends a strong signal about the direction of the sequel and gives a big hint about the baddie. THR also confirms that the “studio seeks to build to the classic ‘Death of Gwen Stacy’ story.” In the comic book series, Gwen Stacy was Peter’s first love — until she became collateral damage in a battle between Spider-Man and the Green Goblin. As a consequence, M.J. will play a very tiny role in movie, laying the groundwork for a bigger role in any possible third film.

I think Woodley is a terrific choice for this character; she’s gorgeous and has a feistiness about her that doesn’t seem bitchy. So she appears to be a great blend of strong and sexy, which is M.J. all the way.

After getting noticed playing the lead in ABC Family’s The Secret Life of the American Teenager, Woodley was cast as George Clooney’s rebellious daughter in The Descendants — a role that earned her a boatload of critical adoration, including a Golden Globes nomination for best supporting actress, and won her an Independent Spirit Award.

As luck would have it, TSLOTAT was just canceled, so Woodley is filling her schedule. In addition to the Spidey flick, Woodley has also booked the lead role in Divergent, the adaptation of the Young Adult novel tipped as the next Hunger Games.

There’s a new trailer out for The Amazing Spider-Man (which opens July 3) that clocks in at a hefty 4:03, and it contains a nice new scene of Spidey not only being a hero, but a good guy.

Most of the rest of the clip looks to be familiar material, but with some nice new additions. It’s certainly worth watching. Looks to me like this version of the Spider-Man tale will put a lot of emphasis on the relationship between Peter Parker (Andrew Garfield) and Gwen Stacy (Emma Stone), with a lot less angst than we saw between Peter (Tobey Maguire) and Mary Jane Watson (Kirsten Dunst) in the previous three modern movies. I think new director Marc Web – who made the Zooey Deschanel vehicle (500) Days of Summer, is just the guy to pull off the relationship material. The question is, can he do action? Based on this clip, I’m gonna say Yes. In fact, it looks like action with heart!

You don’t need spidey sense to get the feeling that The Amazing Spider-Man is going to be something special. In fact, I think it will turn out to be better than The Dark Knight Rises. (The Lizard is certainly a better villain than Bane.)

When this project was announced, and for most of its production time, I had little to no interest in TASM, figuring it was too soon after the Sam Raimi/Tobey Maguire series to “revive” the property. And besides, director Marc Webb had never done an action movie before – and he hired a British dude to play archetypal Queens kid Peter Parker.

But the newest trailer for the reboot has me convinced that this movie is going to be worth seeing. It just… feels like the comic book. Watching Spidey tangle with the Lizard in this clip reminded me so much of the early Stan Lee/Steve Ditko days that it feels like the comics come to life. Except updated with modern colors and visual flair. I especially like the shots where Spidey crawls upside-down and strikes comic-like poses while swinging on his web lines. 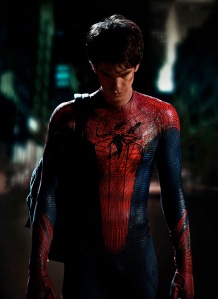 Well, here it is, the first official photograph of Andrew Garfield in costume as Spider-Man for the as-yet untitled reboot film due in 2012.

I have to admit I was shocked that the uniform looks only slightly different than the long underwear that Tobey Maguire wore for the three films directed by Sam Raimi. Not sure that’s such a great idea, since this film is supposed to be a reboot of the franchise. But perhaps director Marc Webb wants to remind folks that this is the “modern” Spider-Man, not the one from the 1977 TV series or the 1967 animated series (the one with the “Spider-Man, Spider-Man, does whatever a spider can” theme song)? I was never a fan of the texture of the uniform which makes Spidey look kind of… blotchy. I was hoping for a sleeker look. But this is still vastly superior to the odious Green Lantern costume.

Leaving all that aside, I do like this image, because Garfield looks skinny and gawky in the costume, which reminds me of co-creator Steve Ditko’s original version of the character. I’m really happy that they didn’t sew rubber muscles into the costume, but that would have looked ridiculous. In this image, Peter Parker looks battered and somewhat defeated, so perhaps we’ll also be seeing Spidey’s lovable loser persona from the early days of the comic.

Thanks to this photo, I have upgraded my outlook on this movie from “pessimistic” to “wary.”

So there’s a new director at the helm of the Spider-Man movie franchise: Marc Webb (no pun intended), whose (500) Days of Summer made such a splash last year, is taking the reins from genre fave Sam Raimi. Some reports indicate that Webb has signed to make a trilogy of films for Columbia.

First of all, a round of applause for all of Raimi’s hard work and creativity. His first two Spidey films were great fun, and the second is certainly one of my favorite superhero films to date; it will go down in cinema history as a classic. The third installment? Well… not so much. Spider-Man 3 fell into the textbook trap of how to ruin a superhero movie: overstuff it with everything (including the kitchen sink) you can lay hands on. So, the less said about that, the better. Let’s remember Alfred Molina’s stirring turn as Dr. Octopus, and Spidey’s heroic rescue of the runaway commuter train in Spider-Man 2.
END_OF_DOCUMENT_TOKEN_TO_BE_REPLACED