The baddies and supporting characters of Marvel’s Guardians of the Galaxy are getting their chance to shine on a bunch of colorful character posters ahead of the Aug.1 release of the science-fiction action comedy.

The villains include Lee Pace as Ronan, Karen Gillan as Nebula and Djimon Hounsou as Korath. 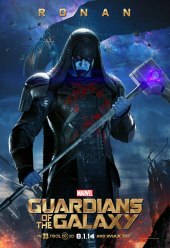 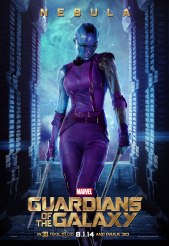 James Gunn, director of Marvel’s Next Big Thing, the Guardians of the Galaxy movie, posted the first clear image of Ronan the Accuser, the antagonist of the movie, on his Twitter today.

Ronan (played by Lee Pace) is a badass member of the Kree race, and he’s known for carrying a big… hammer-thingy… which he appears to be pointing toward us in this photo. You can find this, accompanied by Gunn’s witty caption, here, on his official Twitter feed. 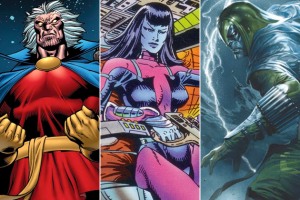 The Collector, Nebula and Ronan the Accuser

It would appear that reliable information about casting in the Guardians of the Galaxy movie has finally leaked out. I say finally because the movie has already begun filming in Great Britain under director James Gunn, so this info has been kept under wraps for a remarkably long time!

Benicio Del Toro (The Usual Suspects) looms large as the main villain, an alien called the Collector, who is billions of years old and travels the universe… er, collecting things he deems worthy — including certain people. The Collector can see into the future, and once envisioned a universe enslaved by Thanos — the deep-space baddie glimpsed in the post-credits sequence of last year’s The Avengers.

Lee Pace — the romantic pie baker on TV’s whimsical PUSHING DAISIES — will play tough guy Ronan the Accuser, a member of the alien race known as the Kree, and he serves as a one-person judge, jury and executioner. He’s been known to carry around a big hammer.

Finally, the stunningly beautiful Karen Gillan is playing Nebula, a blue-skinned pirate who may or may not be the granddaughter of Thanos.

Look for Guardians of the Galaxy in theaters next summer. 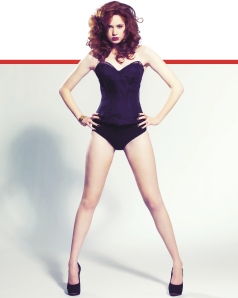 After playing Amy Pond, the best friend of the 11th Doctor for nearly 2 1/2 years on DOCTOR WHO, Karen Gillan has been seduced by the Dark Side! She will play the lead villainess in Marvel’s Guardians of the Galaxy film.

Karen’s character is unknown, because the script is being kept tightly under wraps; only wisps of details have leaked out. The film was also being cast very slowly, although now the ranks are filling in more quickly. We know, for instance, that Lee Pace (PUSHING DAISIES) has been cast as the Big Bad… but not the character’s name.

Rumor has it Pace is playing the Collector — which is a very interesting choice, because it would fit in perfectly with the rumored overall plan Marvel has for its movies. The Collector is linked to Korvac/Michael, one of the greatest storylines from the Avengers comic book series, and that tale dovetails with Thanos — the master villain Avengers director Joss Whedon is “saving” for Avengers 3. (Yes, that’s right, Avengers 3, not the upcoming Avengers 2.)

Anyway, the rest of the Guardians of the Galaxy cast includes Chris Pratt as Starlord, Zoe Saldana as Gamora, Dave Bautista as Drax the Destroyer, and Michael Rooker and Glenn Close in undisclosed roles.

Trust director/screenwriter James Gunn (Super and cult fave Slither) to get his ducks in a row soon, as filming is scheduled to get under way later this month for release on Aug. 1, 2014.

And I, for one, welcome our new alien overlady…