ALCATRAZ, J.J. Abrams’ big contribution to the network TV lineup last fall, was officially executed by Fox this week, after just one brief season of 13 episodes — a decision that was criminal.

So, this is me, being angry that Fox has canceled ALCATRAZ. I thought the thriller was really hitting its stride toward the end of its run, but of course the network could not take the risk of bringing it back when the world is in such dire need of new generic cop shows, dumb comedies and more “reality” series. It would seem ALCATRAZ’s crime was not being more of the same.
END_OF_DOCUMENT_TOKEN_TO_BE_REPLACED

Well, what’d you expect? That opening the Warden’s Mystery Door would lead to some kind of magical golden cave that would explain the secret of the time jumps? Al Capone’s vault? All the answers your heart desires? Madness?

Madness? This is ALCATRAZ!

Still, this was the season finale, so the audience was given some small answers and teases about whom might be behind everything, but there’s still enough mystery to warrant another season. In fact, a whole slew of new questions will need to be addressed next year. If the show isn’t renewed (and, sadly,  there’s a good chance it won’t get another season), then this was an unsatisfying ending — and not just because Rebecca appeared to die on the operating table in a clearly manipulative ending. I want to know more about the time-travel aspect of the plot.
END_OF_DOCUMENT_TOKEN_TO_BE_REPLACED 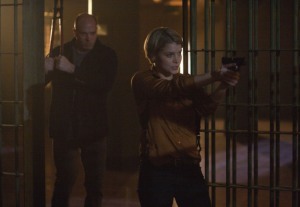 In the opening hour, the titular Ames brothers are Herman (Travis Aaron Wade) and Pinky (Graham Shiels, ex-Cody, GENERAL HOSPITAL), who used to stage flashy thrill heists back in the 1950s. On The Rock in 1960, they wanted to track down Civil War gold rumored to be stored on Alcatraz. They hatched a complicated plan to copy the warden’s special large keys with the help of a guard named Donovan (Frank Whaley) — but the keys didn’t fit the underground vault they assumed held the gold, and the boys were caught. Transported to 2012, the brothers resumed their quest, again with the help of Donovan, who posed as a park ranger. They wanted to blast their way through that door, but when Doc Soto (Jorge Garcia) stumbles upon Pinky, he gets taken hostage because the brothers see the value in having an Alcatraz expert update their 50-year-old treasure map.
END_OF_DOCUMENT_TOKEN_TO_BE_REPLACED

I admit to being underwhelmed by this week’s ALCATRAZ. It was enjoyable enough, but felt very formulaic and a bit tired, even for such a new show. I think I’m getting bored with the “63 of the Week” format, more than the show itself, which remains engaging.

Poisoner storylines are not that common, even on procedurals, so at least ALCATRAZ shook up the formula to that degree. And Johnny McKee’s motivation for his crime spree was a bit different, too.
END_OF_DOCUMENT_TOKEN_TO_BE_REPLACED 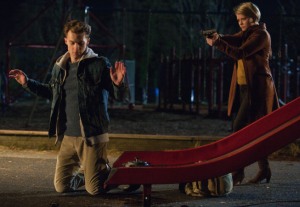 See, this is what I like about ALCATRAZ: The show isn’t torturing its audience by stringing things out unnecessarily. It has been clear since the pilot that there was something between Hauser and Lucy, and this week viewers got to see it pretty much spelled out in surprisingly charming terms for the gruff Hauser and cold Dr. Banerjee/Sangupta. Plus, we learned some important stuff about how the 63s move through time.

Well, maybe it’s more like we learned something about what didn’t happen to the 63s.
END_OF_DOCUMENT_TOKEN_TO_BE_REPLACED

At last ALCATRAZ gave us a little more information about Rebecca’s odd background, including her criminal grandfather and the real deal behind “Uncle” Ray Archer. And we got to learn a bit about what happened to the guards when the 63 got disappeared.

Guy Hastings (Jim Parrack) was the head of guard training on The Rock, and one of the men he taught the craft was a young Ray Archer (Robbie Amell). On his first day at Alcatraz, Ray was attacked and beaten senseless by inmate Tommy Madsen (David Hoflin). Guy appears in the present and goes gunning for the aged Ray (Robert Forster), not to kill him, but to force him to lead the way to Tommy. Guy claims that “They” told him hunt down Tommy — but shares nothing else about his mission.
END_OF_DOCUMENT_TOKEN_TO_BE_REPLACED

Hmmm, it’s only episode four and ALCATRAZ has already gone to the ol’ cop-inside-the-hostage-crisis story. That’s pretty fast to resort to one of the clichés of the genre. On the plus side, the bungled bank robbery didn’t take up much of the story, and I actually thought the motive for the crimes showed some imagination.

The 63 of the week was bank robber Cal Sweeney (Eric Johnson), whose M.O. was to steal only from safe-deposit boxes, leaving the cash in the safe untouched. Unfortunately, he also killed a few people along the way, attracting the attention of Madsen (Sarah Jones) and Soto (Jorge Garcia). The 1960 flashback showed a little more about the way Deputy Warden E.B. Tiller (Jason Butler Harner) exploited the Alcatraz black market, which was operated by Sweeney. Also, we got to see that Chief Warden Edwin James (Jonny Coyne) had nothing but contempt for Tiller.
END_OF_DOCUMENT_TOKEN_TO_BE_REPLACED

As expected, ALCATRAZ slotted right into the “63 of the Week” format this week, introducing the newest returnee from the legendary Rock, child-killer Kit Nelson. But viewers also got a far-more-interesting peek at Dr. Diego Soto’s backstory — y’know, his origin story.

Child murderers are at the bottom of any prison pecking order, so Kit (Michael Eklund) found life behind bars to be a litany of daily beatings. But it didn’t reform him. When he appears in the present, he resumes his old practice of abducting a child on a Friday night with the intention of returning him home on Sunday — dead. But not if “Doc” Soto (Jorge Garcia) and Madsen (Sarah Jones) have anything to say about it. (And they do.)
END_OF_DOCUMENT_TOKEN_TO_BE_REPLACED 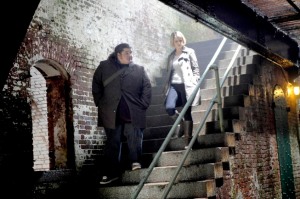 Network executives scrambling to find the next zeitgeist-changing LOST can relax — the successor to LOST has been found, and it’s called ALCATRAZ. This new Fox series, from a lot of the same people who produced LOST, can best be described as “LOST on a Different Island.” Plus, it’s produced by J.J. Abrams!

Seriously, ALCATRAZ has adopted a lot of the tropes of LOST, including a mysterious island, strange characters, cryptic clues, random character appearances, backstories and flashbacks, and a powerful Character Who Knows Stuff. Plus, it stars one of LOST’s most beloved actors, Jorge Garcia (ex-Hurley), so how much closer to the former fan phenomenon can it get?
END_OF_DOCUMENT_TOKEN_TO_BE_REPLACED

This week’s LOST gave us another set of long-sought answers amid another fine Ben-centric episode, one that teased out his central motivation (in both universes): lust for power.

On the Island, Ilana (Zuleikha Robinson) took Ben (Michael Emerson) prisoner, and he explained how he sacrificed what he valued most — his daughter, Alex (Tania Raymonde) — for the sake of the Island. Or, more specifically, because Jacob (Mark Pellegrino) had led Ben to believe that he had a great responsibility as protector the Island. “I had a chance to save her, but I chose the Island over her,” he confessed. “All in the name of Jacob.” So he stabbed Jacob to death as revenge…but also out of fear of losing his power over the Island’s denizens.
END_OF_DOCUMENT_TOKEN_TO_BE_REPLACED