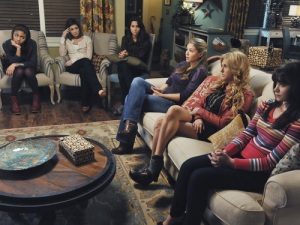 For longer than GAME OF THRONES has been promising that “Winter is coming,” MAKE IT OR BREAK IT has been milking the crucial reveal to Payson that Lauren sent the NGO pictures of Payson kissing Sasha —  nearly ruining both their lives. The time of reckoning finally came this week, and it hit with the force of a blizzard.

Alfred Hitchcock famously said the key to suspense is giving the viewing audience more information than the characters have — and, in the best Hitchcockian tradition, we fans have known forever (well, since the season two episode “If Only…”) that Lauren was behind the stunt, so we’ve been in suspense waiting for the catharsis of the other shoe dropping ever since.
END_OF_DOCUMENT_TOKEN_TO_BE_REPLACED 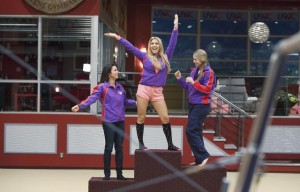 It’s been almost a year since we had any new episodes of MAKE IT OR BREAK IT, and the dawning of the new season means a new location, new storylines, new cast members — and the relegation of some characters to the back burner, while others were shown the door.

The Big Three — National Champion Kaylie (Josie Loren), Lauren (Cassie Scerbo) and Payson (Ayla Kell) — arrive at the U.S. Olympic Training Center in Colorado Springs, Colo., after just barely qualifying back in last season’s finale. At the OTC, they meet Coach McIntire (Dondré T. Whitfield), who will put them through a grueling eight-week regimen and only the survivors will go to London.
END_OF_DOCUMENT_TOKEN_TO_BE_REPLACED