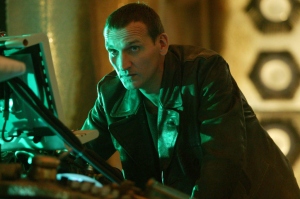 The erstwhile Ninth Doctor, Christopher Eccleston, has told an Australian radio station that he wishes he had stuck with DOCTOR WHO longer than just one series.

Eccleston said to Melbourne, Australia’s 774 ABC: “It was kind of tragic for me, that I didn’t play him for longer. He’s a beautiful character, and I have a great deal of professional pride and had I done a second season, there would have been a marked improvement in my performance. I was learning new skills, in terms of playing light comedy. I was not known for light comedy and, again, production did not allow for that.”

The Ninth Doctor gave way to the 10th (David Tennant) after just 13 episodes in the 2005 revival. The parting of the ways was attributed to “creative differences,” and in the years since, both Eccleston and his executive producer, Russell T Davies, had declined to elaborate — until last year, when the actor began dropping cryptic little comments that, when assembled, gave some insight into the reasoning that led to his early departure.

END_OF_DOCUMENT_TOKEN_TO_BE_REPLACED

Tom Hardy (Mad Max: Fury Road) portrays the Kray Brothers, real-life identical twins Ronald and Reggie, who ruled the underground of London during the Swinging ’60s with a gang that dabbled in everything from protection rackets and armed robbery to murder.

Apparently Hardy is trying to make up for being the sidekick in Fury Road by playing both leads in this movie, which co-stars Emily Browning, Christopher Eccleston (the Ninth Doctor), Chazz Palminteri and David Thewlis (Remus in the Harry Potter films).

The story of the Krays was portrayed onscreen once before, in 1990’s The Krays, starring brothers Gary and Martin Kemp of Spandau Ballet.

Legend opens Oct. 2 in the USA.

Turns out that DOCTOR WHO executive producer Steven Moffat had something quite specific in mind when he cast Peter Capaldi as the next Doctor — a Time Lord who is definitely not a playful and dashing young man like predecessors Matt Smith and David Tennant, but one who is more “mad,” like Tom Baker!

Moffat told the latest issue of Doctor Who Magazine:

“There would be little point in making as radical a change as we’ve made unless you’re going to go quite different with the Doctor. The last two Doctors have been brilliant, and have been your ‘good boyfriend’ Doctors. But the Doctor isn’t always like that. There is the sort of Tom Baker, Christopher Eccleston end of the spectrum, where he is mad and dangerous and difficult.”
END_OF_DOCUMENT_TOKEN_TO_BE_REPLACED 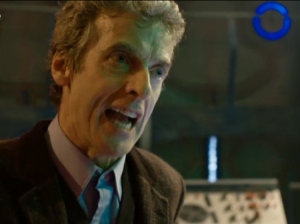 Although Peter Capaldi was only the Doctor onscreen very briefly at the end of “The Time of the Doctor,” he established that not only does the 12th Doctor have a new face, he has a new way of speaking — in a Scottish accent!

The Doctor was previously played by two other Scottish actors — Sylvester McCoy portrayed the Seventh Doctor and David Tennant the 10th — but they were not allowed to use their native accents onscreen. McCoy managed to sneak in the occasional rolling Rrrrrr and some other small flourishes, but he wasn’t speaking like Jamie McCrimmon for his entire tenure. Mostly, McCoy was speaking standard English.

But now along comes respected actor and Scotsman Capaldi and his Scots accent, and show-runner Steven Moffat has decided to let Peter be Peter.

“The decision for Peter Capaldi to have a Scottish accent as the Doctor was a creative decision and it was not part of his contract.”

END_OF_DOCUMENT_TOKEN_TO_BE_REPLACED

DOCTOR WHO show-runner Steven Moffat confirmed to Doctor Who Magazine that the original plan for the 50th anniversary story, “The Day of the Doctor,” had Christopher Eccleston’s Ninth Doctor wiping out Time Lords and the Daleks to end the Time War — a job that eventually went to the newly created War Doctor (John Hurt).

But even in the beginning, Moffat knew there was a good chance his plans would have to change due to Eccleston’s famous reluctance to revisit the role:

“I was pretty certain Chris wouldn’t do it, although he did agree to a couple of meetings. So, instead, we had the challenge and excitement of introducing a BBC audience to a brand-new Doctor.”

END_OF_DOCUMENT_TOKEN_TO_BE_REPLACED

Marvel Studios has released another poster made of win for Thor: The Dark World — this one finally giving us a good look at the film’s villain, Malekith the Dark Elf.

“Malekith is the cruel leader of the Dark Elves, a race of beings said to be older than the universe itself. Born into darkness, Malekith led his people in a war against the Asgardians, but they were thought to have been destroyed thousands of years ago. Malekith survived, however, and now seeks to transform our universe, plunging it back into eternal darkness.”

I’m liking the lifeless masks that the Dark Elves wear, and I’m really looking forward to this sequel’s Nov. 8 release. 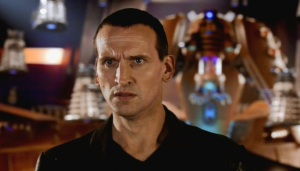 Apparently there was a secret plan to include Christopher Eccleston’s Ninth Doctor in DOCTOR WHO’s 50th anniversary story, but the actor has chosen not to participate after all — perhaps due to his commitments to filming Thor: The Dark World; perhaps for other reasons.

This news is certainly disappointing, but Eccleston has a right to make the call. What I find most intriguing is that a number of DOCTOR WHO-related websites — including Kasterborous.com — have been sitting on the news that Eccleston apparently had agreed to appear “in principle” at some earlier junction. I tip my hat to those websites for keeping the surprise under their hats, leaving open the possibility of genuine fan surprise when the show was broadcast. Good on them, for valuing story integrity over a momentary “scoop.”
END_OF_DOCUMENT_TOKEN_TO_BE_REPLACED

Yes, this is one bit of fan service that just refuses to die — no doubt because DOCTOR WHO fans want it so very badly. The new twist on the same old rumor is that show-runner Steven Moffat — who is writing the anniversary episode as we speak — has fanned the flames with a cryptic remark of his own.

“Getting the other Doctors involved would be very fitting for the anniversary episode wouldn’t it?”

Could it be true? Could the collective greatest dream of DOCTOR WHO fandom come true in this, the series’ 50th anniversary year? I am referring, of course, to a special episode featuring all the living actors who have played the Doctor. But the newest rumor bouncing around the Internet today is that Steven Moffat is penning an episode incorporating all 11 Doctors — played by their original actors!

Now, before we get all teary-eyes over the prospect of David Tennant’s 10th Doctor working alongside Peter Davison’s Fifth Doctor once again, or Matt Smith’s barking mad 11th Doctor getting a hand from Patrick Troughton’s fussy Second Doctor, we need to take a deep breath and note that this is nothing more than a rumor.

And not even a very solid one, at that. The Birmingham Mail newspaper printed a story about an 11-Doctor special this morning without any sourcing or quotes — a sure sign that the story should be taken with a huge grain of salt (if not the entire salt shaker). Plus, certain details mentioned don’t really ring true.
END_OF_DOCUMENT_TOKEN_TO_BE_REPLACED