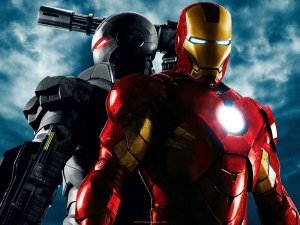 They don’t build ‘em like they used to, and they don’t make Iron Man movies like they used to, either. Iron Man 2 is basically more of the same — but slightly less entertaining. And that’s the movie’s only real flaw: It’s just not as fresh and original as the first film. If you loved the first one, you will be very happy with this one.

Robert Downey Jr. is still the center of the film, and he still plays playboy inventor Tony Stark as light a mixture between a petulant child, a nerd, Hugh Hefner — and Capt. Jack Sparrow from Pirates of the Caribbean. The self-indulgent Stark is (sort of) reined in by his coolly-efficient assistant Pepper Potts (Gwyneth Paltrow) — until he realizes that she really is better at doing his job than he is.

Stark’s job in this movie is to fend off rival industrialist Justin Hammer (Sam Rockwell), who could be Stark’s less-competent twin. Hammer teams up with Russian madman Ivan Vanko (Mickey Rourke), who feels that his father was cheated by Stark’s father, Howard, and creates a supersuit of his own that employs energy whips to incapacitate his foes. Rourke certainly looks and sounds like a survivor of a corrupt Russian prison system, but Vanko’s motives are only barely hinted at — a weakness of the script, not Rourke, who gives it his all. He makes Vanko mad in the sense of being both angry and crazy.
END_OF_DOCUMENT_TOKEN_TO_BE_REPLACED

Why? Why did Sun, Jin and Sayid have to die?

Simple. They gave their lives in service of the story. Because their deaths added to the drama. Because a higher power — the-powers-that-be behind LOST — realized that sometimes story threads need to be snipped rather than tied off. Because TPTB have set the endgame in motion, and after six seasons, this all has to mean something. Plus, the characters died heroic, self-sacrificing deaths — the best kind possible, I suppose.
END_OF_DOCUMENT_TOKEN_TO_BE_REPLACED

GLEE got off to a rough start for me this week, because I actually did not like the opening number, a rendition of “Ice Ice Baby” performed by Will (Matthew Morrison). I don’t have a problem with Morrison’s rapping – I really enjoyed his versions of “Gold Digger” and “Bust a Move” for example; it’s just that something about “Ice Ice Baby” left me cold. In fact, it wasn’t just Will. I thought the backing vocals were off as well. Maybe the song just wasn’t mixed properly from broadcast. I’ve been trying, but I can’t recall another performance on GLEE that I really actively disliked.

In another misfire, Sue Sylvester did another video, which meant the wonderful Jane Lynch got to perform with guest star Olivia Newton-John on a refurbishing of her hit “Physical.” I thought the vocals were electronically manipulated a little too much, but perhaps the producers had to do it to cover up some mistakes. Sue herself suffered from the mistake of giving Kurt access to her office, so he was able to get hold of video of Sue rocking out to the original “Physical.” The video went viral on the Web (after the gleeks uploaded it) and Sue was humiliated — on a global scale. Of course, in Sue’s case, everything is larger than life, right? Still, it was shocking to see Sue on the other side of the popularity coin – as the butt of “slow-motion laughter.”
END_OF_DOCUMENT_TOKEN_TO_BE_REPLACED

Clash of Titans is one of those remakes that was in no way really necessary, but with a stubbornness that would make Zeus proud, Hollywood went ahead and did it anyway – and the result demonstrates the folly of messing with movie gods like special-effects wizard Ray Harryhausen.

Even more than featuring Laurence Olivier playing the king of the gods and Harry Hamlin in a toga, the 1981 original is known for Harryhausen’s legendary stop-motion animation effects. In his final feature, Harryhausen animated Calibos, Medusa, the Kraken and all the rest by hand; he more than just a true craftsman, he was an artist with puppets. There was no reason to remake this movie unless the effects were going to completely blow the classics out of the water – and that just does not happen in the 2010 version. Granted, the computer-generated creatures move a lot more quickly and smoothly, and yes, the giant scorpions look impressive, but – why are there giant scorpions in this movie? More importantly, the creatures that Harryhausen lovingly brought to life frame-by-torturous-frame had a sense of personality that soulless CGI lacks. The ballyhooed 3D effects (tacked on as an afterthought following the runaway success of Avatar, at the expense of delaying release) add absolutely nothing to the viewing experience. The movie was not filmed with the intention of utilizing 3D all along, so the effects clearly are not used to best…er, effect.
END_OF_DOCUMENT_TOKEN_TO_BE_REPLACED 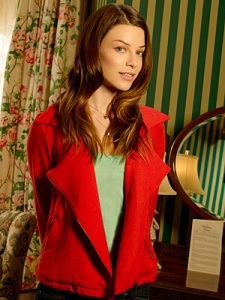 Unless you have been avoiding ABC programming entirely for the past few months, you are doubtless aware that the network had a new crime series, HAPPY TOWN, debuting this week. This question is: Was it worth the saturation promotion and megahype?

Well, not really. HAPPY TOWN is enjoyable enough, but in no way is it groundbreaking appointment television. The bizarre serial-kidnapper whodunit invites – make that begs – comparison to TWIN PEAKS by openly aping the iconic series with everything from its rustic small town to its quirky residents to a sheriff investigating a bizarre murder. In this case, the victim has a railroad spike driven into his head, resulting in a hole that goes clean through his skull, allowing sunlight to shine through. While somewhat novel for network TV, this is no Laura Palmer, the homecoming queen “wrapped in plastic.”
END_OF_DOCUMENT_TOKEN_TO_BE_REPLACED

FRINGE took some chances this week by using one of those oddball “tell me a story” plotlines. In this case, Olivia’s niece Emma begged for a tale from Walter, who had just indulged in a custom-blended pot smoking binge. That combined with his grief over Peter’s disappearance to produce a strange noir that was equal parts Dashiell Hammett, Broadway, The Princess Bride and a pinch of The Wizard of Oz.

Olivia was cast as a hard-boiled private eye, hired by a woman named Rachel to find her missing fiancé, Peter Bishop, who has absconded with an artificial heart. The fun came from seeing the twisted versions of familiar faces. The period dress and hairstyles were great. Even stuffy Broyles (Lance Reddick) got in on the fun. I loved the mixture of old cars with cell phones. Walter cast himself as a crippled scientist who invented all the wonderful things in the world (chocolate bars and teddy bears), as well as singing corpses (“Why not bring a little life to the dead?”) – and an artificial, glass heart. Kudos to John Noble and Anna Torv for bravely warbling a couple of tunes – especially after Jasika Nicole (Astrid) showed off her trained pipes.
END_OF_DOCUMENT_TOKEN_TO_BE_REPLACED 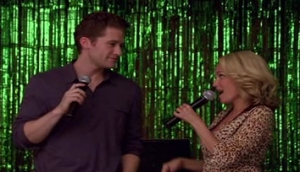 Will and April duet right.

Each episode of GLEE since its return has been better than the one before, and this week’s installment, called “Home,” was no exception. A treatise on the concept of finding someplace to belong, the story also saw the welcome return of Kristen Chenoweth as April Rhodes. This was one of those episodes that had viewers laughing, singing along and then crying – sometimes practically all at once.

The storyline saw Sue (Jane Lynch) boot the glee club from the auditorium, sending Will (Matthew Morrison) in search of rehearsal space. That quest brought him into contact with April, who was running a roller rink because she got sidetracked on her journey to Branson. April, too, was searching for someplace to belong – was she really happy playing the mistress of a local strip-mall king? When she and Will dueted on “Fire,” it felt like she rediscovered where she belongs: by his side. Morrison’s and Cheno’s voices mesh perfectly, and they look good together, so it was no wonder April wanted to move in with him immediately. (I’m sure Emma would have something to say about that…) Their duet on “One Less Bell to Answer” was heartbreaking.
END_OF_DOCUMENT_TOKEN_TO_BE_REPLACED