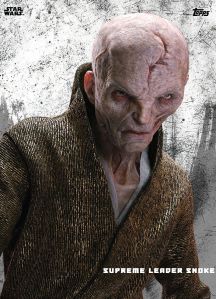 As the release of Star Wars: Episode XIII — The Last Jedi draws closer, more and more information is leaking out, and the latest “reveal” relates to the appearance of Supreme Leader Snoke, the shadowy power behind the villainous First Order: He looks exactly like we figured he would.

An official trading card from Topps gives the first clear view of the Big Bad, seen in 2015’s The Force Awakens only as a bluish hologram. We can see that he has a giant scar on his head and a rather thin and drawn face. We don’t know if this is his species’ natural appearance or whether his face has been distorted by the Dark Side of the Force, as with Emperor Palpatine in the earlier films.

However, while his face has been drawn out of the shadows, Snoke himself will remain behind the scenes for one more movie. (This is only the middle part of a trilogy, remember.)  Director Rian Johnson told Empire magazine that Kylo Ren is main villain of Episode XIII and Snoke will remain a mystery for a while longer.

“[Snoke is] a dark force: the scary thing behind the thing,” Johnson said. “That was entirely how I approached Snoke. I wasn’t interested in explaining where he came from or telling his history, except where it serves this story.”

Johnson believes audiences can connect with the father-murdering Ren (played by Adam Driver). “We can all relate to Kylo, to that anger of being in the turmoil of adolescence and figuring out who he’s going to be as a man; dealing with anger and wanting to separate from his family,” Johnson said. “He’s not Vader — at least, he’s not Vader yet — and that’s something I really wanted to get into.”