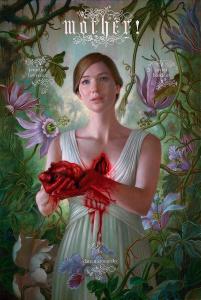 After a long absence – has it really been since last December’s Passengers?– Jennifer Lawrence, Oscar-winning actress and America’s Sweetheart, is returning to screens this fall in a psychological thriller/horror movie called Mother! (yes, the exclamation point is part of the title).

It’s written and directed by Darren Aronofsky, who did the masterful Black Swan, so we should expect lots of mind games from the script. Let’s take a look at the excellent, intriguing trailer:

My first impression is that the trailer is very tense, aided immeasurably by the music, which I don’t recognize. (This is a major plus, as modern trailers all seem to use the same five or so musical selections; boring.) Is it from the film? I hope so!

Also evident is the continuing, curious idea Hollywood has about age-appropriate spouses. Does Javier Bardem look like the kind of man JLaw would marry? Doesn’t he read as too old for her? In real life, he’s 48 and she’s 26 years old. I’m not saying it’s out of the question; the producers obviously wanted Jennifer’s Queen of the Box Office star power, but Javier’s character is made up to look a lot older than he is, which makes the relationship seem shady right away. (Is that a disservice to the movie’s mystery?) Michelle Pfeiffer is 59, and she’s paired with Ed Harris, who’s 66. That’s at least a  more common age difference.

My other biggest question after watching this: Why is the movie called Mother!? Is the title a spoiler – that Michelle’s character is someone’s mother? Or is Jennifer the titular (young, hot) mom? Do the gruesome movie posters offer any clues? Hint: Yes! Examine both posters very closely, looking for hidden images, such as a lighter, a jewelry box and… what’s that reflected in the orb Javier is holding?

JLaw has done horror before (2012’s disappointing House at the End of the Street), so it’s interesting to see her returning to the genre, and with a superior director. But this trailer hints that the movie might be something more than horror. What was that concoction her character was drinking? Could it be she’s being tormented and driven mad, a la Gaslight? Who would be doing that to her, and why?

It seems that Ed Harris (WESTWORLD) always plays the heavy nowadays, so he’s Suspect No. 1, though I hope Aronofsky has cast against type here and made the baddie harder to guess. And hasn’t Michelle done this kind of thing before, in What Lies Beneath (2000)?

What do you think? Are you looking forward to this flick, or does it look too schlocky for you? Let me know in the comments below!