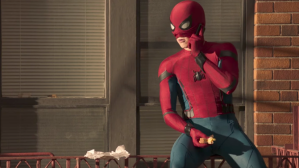 Spider-Man: Homecoming, the Sony/Marvel Studios co-production that aims to rehabilitate the film franchise saw the release of two new posters today — and the results are decidedly mixed. Like the two-headed monster that this dual-studio movie is, the promotional material appears schizophrenic. One poster looks like it’s promoting a new Iron Man flick, while the other looks much more like a Spider-Man movie. 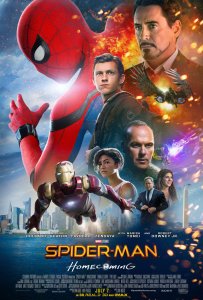 Let’s look at the posters designed for release in the USA first. This poster is a jumbled mess: a bunch of no-Spider-Man characters dominate — most notably, Robert Downey Jr.‘s Tony Stark and Iron Man. Now, I don’t blame Marvel for wanting to make sure audiences know that one of their most popular characters is in this movie, but is he the star? RDJ’s matinee-idol mug is clearly the largest, while his alter ego, Iron Man, is depicted rocketing toward the viewer, no doubt to save the day!

But what about Peter Parker/Spider-Man? The movie’s star, relative newcomer Tom Holland, is there, but as a fresh face, is he immediately identifiable? Who are all those other people? And, to top it off, Spidey himself is depicted turning around, as if in shock. Maybe he’s thinking, “How did all those people get behind me?” Way to go, Spidey-Sense!

Poor hard-luck Webhead — he doesn’t even get to be the star of his own poster! 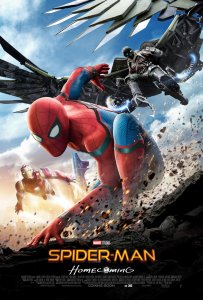 Here’s the international poster, slated for release overseas. Now, this is more like it!

Spider-Man is the dominant figure, and this is an action scene! We see our valiant hero tangling with the main villain, the high-flying Vulture. The star is doing the heavy lifting in this poster. Iron Man is still in the picture, but here he (rightly) takes a backseat to the star of the movie. Stark is a side dish, not the main entree.

I like to think that each studio contributed one poster. Obviously, Sony, which bungled the Spidey franchise, would be responsible for the botched poster, and Marvel, which seemingly can do no cinematic wrong, came up with the good one.

What do you think? Do you like one poster more than the other? Or should they both be sent back to the drawing board? Let me know in the comments section below.