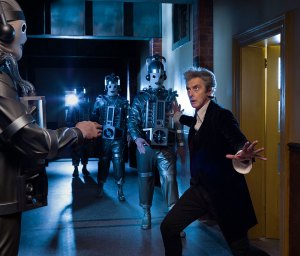 If he has to go, then he might as well go out in a blaze of glory, battling his favorite baddies.

I’m talking about Peter Capaldi, who is leaving the title role of DOCTOR WHO at the end of this, the 10th season of the revived series. A lifelong Whovian, Capaldi has long maintained that his favorite monsters were the Cybermen — specifically the original Cybermen, the ones that appeared in First Doctor William Hartnell‘s final story, “The Tenth Planet.” The Cybermen have reappeared many times over the ensuing 50+ years, but they never looked the same again.

The look of those cybernetic refugees from Mondas — Earth’s twin planet which was knocked out of orbit when our moon was formed — was dictated by the budget constraints of the 1966 serial, thus the silver jumpsuits and ski masks.

But the tiny budget often propelled the DW producers to great leaps of imagination, and creating the voices of the these Cybermen was one of those instances. The creepiness of the sounds more than made up for the dodgy costuming. The decision was made to have the actors portraying the monsters open their mouths and leave them gaping, without moving. Then a voice a voice artist would deliver the lines in a weird, sing-song voice that was completely unnerving. You can see and hear a small sample of it in this clip:

Sadly “The Tenth Planet” was among the stories lost when the BBC erased the tapes of DOCTOR WHO back in the 1970s. Only partial clips of episodes remain.

I am thrilled by the return of the original design — both for nostalgic reasons and as a reward for Capaldi’s brilliant acting work, which sometimes had to rise above some sketchy material in the past two seasons.

The Mondasians will return in the two-part story that wraps up the 12-episode season, which is Capaldi’s third as the titular Time Lord. Capaldi’s 12th Doctor will regenerate into the 13th during the Christmas Special, which airs on Dec. 25 (of course), but no word on what that story will be about.