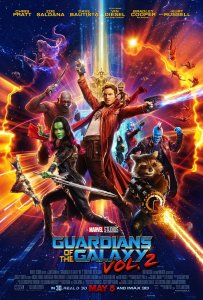 After focusing on Star-Lord’s relationship with his late mother in the first film, Guardians of the Galaxy Vol. 2 tackles Peter Quill’s missing father — who turns out to be Ego, played by screen legend Kurt Russell!

There’s a lot more to the story of Peter’s long-lost Dad than just who he is; readers of Marvel Comics know that when it comes to Ego the Living Planet, what he is poses a much… uh, bigger question.

Director James Gunn decided to change the identity of Star-Lord’s father from the comics, and hopefully we’ll see just why when the movie opens, but it’s worth noting that Russell‘s costume makes him look just like J’son, the emperor of Spartax, who was Peter’s dad in the comics. Hmmmm…

Anyway, check out the trailer, which is packed with action, bright colors and quick quips, which is just what we want from this sequel:

I cannot wait for this movie to open! It’s one of the films I’m most looking forward to this year.

The (self-indulgent) official synopsis of the flick reads thusly:

Set to the backdrop of ‘Awesome Mixtape #2,’ Marvel’s Guardians of the Galaxy Vol. 2 continues the team’s adventures as they traverse the outer reaches of the cosmos. The Guardians must fight to keep their newfound family together as they unravel the mysteries of Peter Quill’s true parentage. Old foes become new allies and fan-favorite characters from the classic comics will come to our heroes’ aid as the Marvel cinematic universe continues to expand.

Guardians of the Galaxy Vol. 2 hits in theaters May 5.