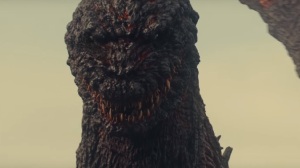 The original home of Godzilla, Japan’s Toho Studios, is getting back into the kaiju game by releasing its own comeback vehicle for the King of Monsters, Godzilla Resurgence.

Check out the international trailer (which features only music — no dialogue, dubbed or otherwise) here!

This will be Toho’s first Godzilla movie in over a decade — the studio licensed the creature to Legendary for 2014’s Godzilla, directed by Gareth Edwards — and it certainly looks like a return to the spirit of the 1954 original, in which Gojira was a rampaging force of nature that had to be destroyed.

Take a look at the details of the new creature’s design: He really looks like a radioactive mutant, with his broken and tumor-ridden skin and especially that lipless mouth baring vicious-looking teeth! Notice the super-long tail and the small, emaciated, almost skeletal hands. I get the feeling this Godzilla is in pain — and maybe that’s why he has such a poor attitude toward Tokyo! But at least he has the classic roar! 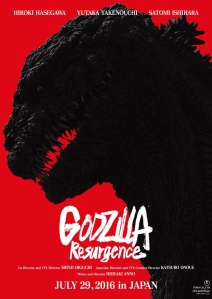 Interesting note: In addition to looking like a reptilian burn victim, this newest Godzilla will be the tallest ever, measuring at least a mind-boggling 385 feet tall! The 2014 Godzilla was 355 feet tall. Back in the black-and-white days, the original kaiju was a mere 165 feet tall.

Godzilla Resurgence comes out in Japan on July 29, but there is no word on an American release yet.