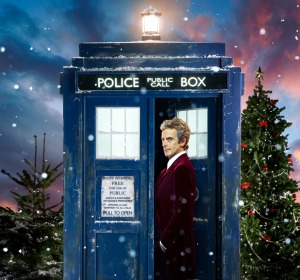 And — in a gesture that Santa Claus would love — the events will also feature an exclusive interview with Alex Kingston (River Song) and a 15-minute “making of” behind-the-scenes featurette starring Peter Capaldi (the Doctor) and executive producer Steven Moffat!

Tickets for the screenings can be purchased online beginning tomorrow, Nov. 13, by visiting the Fathom Events website or participating theater box offices. A complete list of theater locations can be found on the Fathom Events site.

Here is the official synopsis of the special:

It’s Christmas in the future and the TARDIS is parked on a snowy village street, covered in icicles, awaiting its next adventure. Time traveler River Song meets her husband’s new incarnation, in the form of Peter Capaldi, for the first time!