Jenna Coleman confirmed this morning on BBC Radio 1 that she is leaving DOCTOR WHO this season. 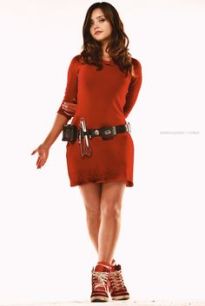 Coleman confirmed that Clara’s exit has “been in the works for a very long time.”

I should say so! You may recall that Clara was supposed to leave series eight twice, but changed her mind both times.

Is it for real this time?

Coleman said that she and executive producer Steven Moffat, who created Clara, started talking about her exit strategy “a year and a half ago and tried to work out the best place to do it and the best place to tell a really good story, so, hopefully that’s what we’ve done. I think it’s really, really cool,”

She promised that Clara’s exit would be organically written into the story.

And, of course, her last day of filming was “emotional”:

“There’s not a lot of jobs where you can go to work and have a spaceship and an alien as your best mate and also run away from monsters. It’s been so much fun…. I love it. It’s such a unique beast.”

Coleman said that although she has finished filming, the reality of her decision has not sunk in.

“I think I’m in denial. I really don’t feel like I’ve left. I think because I see Peter [Capaldi, the 12th Doctor] and I still see Matt [Smith, who played the 11th Doctor] all the time, I kind of believe I still have a key to the TARDIS… which I might do, ’cause I stole it. I stole loads.”

Capaldi said, “Jenna has been absolutely brilliant. I think she’s wonderful in the show, and she’s my favorite companion.”

Coleman debuted as “Oswin” in Asylum of the Daleks in September 2012 in a genuine surprise to fans — who expected her to bow in that year’s Christmas special. She did show up on Christmas Day, but playing a Victorian-era Clara in The Snowmen. modern The modern version of the “Impossible Girl” first appeared in The Bells of Saint John.

Of course, just as the Doctor (and Moffat) lies, the BBC has allowed that Clara could come back, but stopped short of saying she would.

DOCTOR WHO comes back to BBC America tomorrow at 9 p.m.