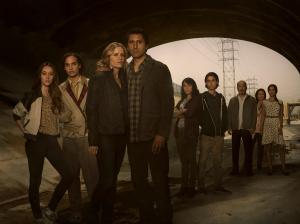 Basically, it sounds to me like the new series is intending to be mostly stuff Deadheads don’t like — dull, extended family stories — and very little of what fans do like — zombies. Remember Season 2, when EVERYONE complained about the survivors holing up on Hershel’s farm and angsting while zombies wandered by off in the far, far distance? Does anyone want an entire series about that? AMC seems to think someone does.

Read the story I linked to, called “‘Fear the Walking Dead’: 5 Reasons to Watch, Even If You Don’t Watch ‘The Walking Dead.'” None of those seems to be a positive to me. (Except No. 5 — knowing there will be a second season is comforting for those intending to watch)

And make no mistake: A disastrous premiere and poorly-rated run of FTWD will damage the mothership severely, because lazy TV writers will say: “The Walking Dead brand has reached its limit; audiences are tired of TWD; TWD is crap now; The magic is gone; TWD is dead.”

Now, of course I haven’t seen the new show, and I am totally willing to give it a chance to blow me away, but I’m not expecting great things based on the way they are pitching it. Do you have a different take on this series? What am I missing? Can you set me right?