There’s been a lot of fuss about the latest armored version of the Batmobile to be seen in the upcoming Batman v Superman: Dawn of Justice (right), but neither the idea of the car itself or constantly evolving versions of it are anything new.

Batman drove a car in his very first appearance in 1939’s Detective Comics #27, but it wasn’t christened the “Batmobile” until Detective Comics #48 in 1941. The vehicle has undergone a number of changes over the decades — and, perhaps not surprisingly, it has seen the most change during the modern “movie” era. 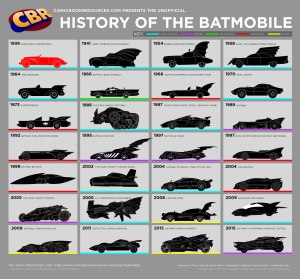 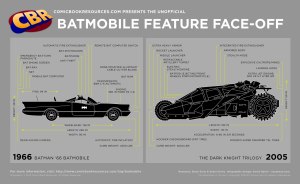 These info graphics, based on research by Steve Sunu, were created by graphic artist and Comics Should Be Good contributor Sonia Harris.

Batman v Superman, featuring the latest iteration of the Batmobile, is slated to be released March 26, 2016.