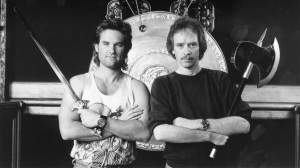 Word is Dwayne “The Rock” Johnson, currently ruling the box office with San Andreas, will star as Jack Burton, the role originally brought to life by Kurt Russell. The announcement was met with almost universal scorn by fandom — which has been spun to be “mixed reactions” — and Johnson told Entertainment Weekly he wants John Carpenter, low-budget maestro and director of the 1986 original, to contribute to the new version:

“I loved reading the reactions from the fans, that they were so polarized – I’m the same way. My response is: know that I come to the project with nothing but love and respect for the original, which is why we want to bring on John Carpenter.”

Sorry, I’m not buying that sentiment. If he really had nothing but “love and respect” for the original, he wouldn’t be part of this shameless cash-grab. Can Johnson really believe he or the filmmakers have anything significant to add to the character/movie? He went on to say:

“I loved the original when I was younger and I loved the main character – all the characters. It felt like if we surrounded ourselves with the right group of people, the right writers who loved the movie too and wanted to honor it, bring on John Carpenter in some capacity … If we did that, then we have a shot at hopefully making something good.”

Hmmm, I wonder what “in some capacity means”? It certainly doesn’t sound like he wants Carpenter to direct or write it — the script is apparently going to be penned by Ashley Miller and Zack Stentz, who wrote Thor and X-Men: First Class. The original was written by Gary Goldman, David Z. Weinstein and W.D. Richter. Let’s hope it’s not a bogus “executive producer” credit.

For what it’s worth, Carpenter himself doesn’t mind when his stuff is remade — believe it or not, four of his films have been redone (to varying degrees of success), including Assault on Precinct 13 (1976), The Fog (1980) and Halloween (1978). And another Carpenter flick that was remade was actually a remake itself: Carpenter reimagined Howard Hawks‘ The Thing From Another World as The Thing — but Carpenter’s 1982 horror masterpiece was more than just remake the 1951 classic, he redefined it — ironically making the case for remaking films!

Carpenter’s attitude is that new versions don’t tarnish his work, and anyone who remakes one of his original works has to write a nice fat check for the rights — but BTiLC doesn’t involve paying off Carpenter. He wrote on his Facebook page, “I only know what I read in the papers. I’m not involved with it… I didn’t write the original one – no harm, no foul.”

Finally, and this is to his credit, Johnson does sound like he’s interested in the integrity of the project:

“Let’s see what feels good, what we can come up with and then go from there. As we write it, if the whole thing starts to stink up, then we thank everybody for their efforts and accept this just couldn’t make it.”

I hope he walks away. And there’s still a possibility he will be pushed — by studio marketing departments. How will today’s cookie-cutter marketing plans pitch BTiLC, which is an insane mixture of martial arts, Chinese mythology, neon lights and droll comedy featuring monsters, gangs, dual roles and a “sidekick” who does all the heavy lifting for a “hero” who is basically a clueless buffoon? Is The Rock willing to play a swaggering lunkhead who is swept along by the events of the film?