I was getting psyched to see this movie, but now I’m back to maybe waiting for Netflix. 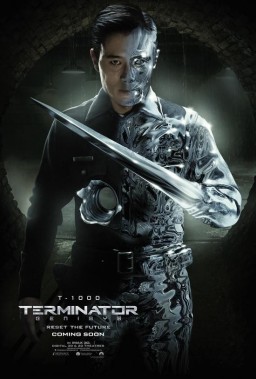 The posters feature: Jai Courtney as Kyle Reese in the standard “sullen hero with his back turned glares at you over one shoulder” cliched pose (FAIL); Emilia Clarke as Sarah Connor, featuring huge fake breasts and a torso longer than a Grey alien’s — we’ve all seen her naked on GAME OF THRONES, and she isn’t deformed like that (FAIL); Arnold Schwarzenegger as the T-800, now with oversized head! (not good); and Jason Clarke as (spoiler!) John Connor the T-3000 — also with stretchy torso (but maybe that’s supposed a Terminator thing?). The only one that looks okay is Byung-Hun Lee as the T-1000.

Also, somewhat predictably, given the secrecy surrounding his role, there’s no Matt Smith — but neither is there hide nor hair of newly minted Oscar winner J.K. Simmons.